A Military History of Modern China 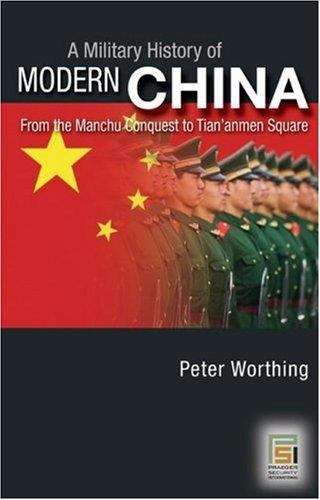 "Organized chronologically, this book is divided into three sections designed to reveal the manner in which war and the military have influenced the course of Chinese history. The first section, Imperial China, underscores the importance of war in China by dealing with the Manchu conquest and military rule over China, the developing technology gap between China and the West, the devastating defeats at the hands of Western powers in the 19th century, and early attempts at military reform and modernization. " "The second section, Republican China, traces important military reforms that gave rise to a revolutionary movement, the overthrow of the monarchy, and attempts to establish a democratic republic. The military played a dominant role in the search for a viable, modern political state during this period, which saw intense fighting between independent "warlords," contending political parties that used military force against their rivals, and a Japanese invasion. " "The third section, People's Republic of China, reveals the critical role of the military and warfare in the period after the Chinese Communist Party came to power. It explores the Chinese Communist role in the Korean War, border clashes with the Soviet Union, India, and Vietnam, changes in military doctrine, organization, and technology, the People's Liberation Army's violent suppression of the 1989 student demonstrations, and the military situation in the Taiwan Strait. The book also includes a section on modern military reform, acquisition of military technology, and relations with Taiwan. "--BOOK JACKET.