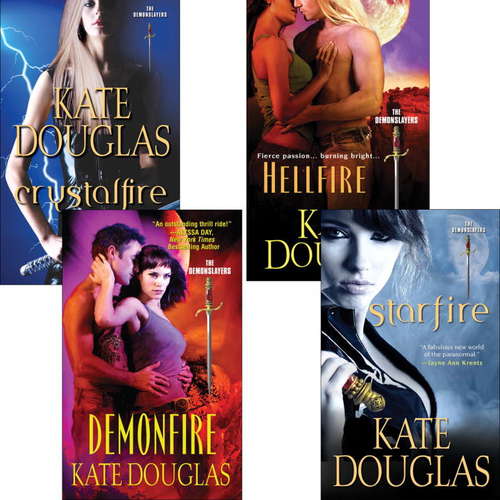 Since time began, the Earth has served as a balance between the world of darkness that is the Abyss, and the paradise known as Eden. Now the battle between good and evil has reached a tipping point, and survival depends on one fallen demon--and the woman he can't resist. . . Demonfire"Kate Douglas does it again! A delicious, sexy romp of a book, with a demon lover to die for and an everywoman heroine who rises to the challenge. It totally sucked me in!" --Angela Knight, New York Times bestselling authorAs night falls in Abyss, an evil beyond measure awakens in secret--an evil that the Demonslayers must vanquish in Kate Douglas's sensational new paranormal romance. . .Dark Flames A new, more dangerous vortex has opened in the besieged Earth and the innocent souls of animals are being invaded by the malevolent strength of a powerful demon. For Ginny Jones, there can be no greater wrong--and to make it right, she joins forces with the Lemurian, Alton, a hard-bodied hero not of her world. Under a black moon, pitched battles for the survival of all that is good will be fought once more. The heat of their sensual passion emboldens the two warriors. . .but such passion may well betray them. . . Conquered, the Demon King has been banished to Abyss--but he is far from dead. A greater danger awaits Ginny Jones and the Demonslayers in this spellbinding, highly sensual paranormal romance. . .Stand By MeThe women of Lemuria are still in chains. The daughter of an enslaved warrior, brutally attacked by a vicious guard, Selyn has survived--barely. Beaten and terrified, she must overcome her fear and trust her life to the only man who can help her: Dawson Buck, one from Earth who has crossed through the portal, a gifted healer. His skills and knowledge renew her body and strengthen her spirit--and awaken a compelling passion she has never known. But she cannot yield...Selyn seeks revenge for herself and her mother and all the Forgotten Ones who toil in secret. If Dawson helps her, his own life may be forfeit. And for Selyn, true love does not ask such sacrifices. . .The Demon King still lives, stronger than ever, devouring souls in search of immortality. Against him stands the scholar Taron, a newly-minted warrior of Lemuria, and Willow, a woman of unearthly loveliness, born of mist. . .SpellboundTaron must pass through the waterfall of molten gold that shields the secret portal to his beloved land. His brilliant mind and the speaking sword called CrystalFire are his weapons against evil. But nothing can protect him from the power of love. Willow, whom he once knew as a sprite who could dance in his hand, has been changed by a master stroke of magic into the form of a beautiful, highly sensual woman, desiring a thousand pleasures that she insists he alone can give her. Innocent and eager, Willow arouses his deepest needs and sexual hunger--and his love. He will risk all to save her, even if it means a battle to the death with the ultimate foe. . . "Douglas is on my keeper shelf!" --Alyssa Day, New York Times bestselling authorPraise for Kate Douglas's DemonSlayers Series"Perfectly entertaining!" --Romantic Times (4 stars) "Wildly entertaining. . . A fabulous new world for fans of the paranormal." --Jayne Ann Krentz, New York Times bestselling author