Poppin' A Cold One 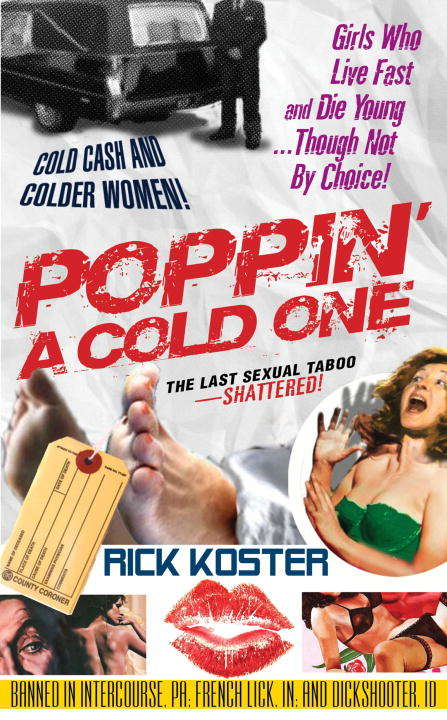 Finn Coffee's scored the perfect job, in the perfect town, with the perfect girlfriend, and the perfect boss. What could go wrong?Funny you should ask...From golf balls to corpses, Finn Coffee likes things to go neatly underground. When he lands a job after graduating from mortuary school with a prestigious funeral home in the glittery casino town of Treasure Coast, Mississippi, the perfect setup turns sour once Finn discovers his co-worker Brad Sheepcake has been making movies on the side--starring attractive ingénues with a singular talent: they're dead. Brad's sideline--necro-porn--is so successful, a ruthless crime syndicate muscles in on the action. Problem is, there aren't enough pretty girls dying fast enough to meet the demand. To speed up the process, hotties in Treasure Coast start disappearing -- including a New Orleans heiress. Enter Crescent City PI Kip Quigley, hired to find the girl. Kip might look like a grown-up Hardy Boy, but he was fired from the NOLA police department for excessive violence and he's lost patience with a stupid world. During his investigation, he befriends Finn. And when the mobsters kidnap Finn's girlfriend, Polly Whitlock, to ensure he keeps his mouth shut, Kip must widen his scope to take on the entire Dixie Mafia and a lunatic former Southern rock musician. Otherwise, Polly might well become the the star of the mob's next film -- The Naked and the Dead.Because poppin' a cold one ain't always about beer... Rick Koster is a native Texan who lives in New England with his wife, the writer Eileen Jenkins, their Catahoula Leopard Dog, Gumbo, and the spirits of the late, great greyhounds, Moosie and Puppy Brown. Poppin' a Cold One is his first novel. He cannot promise it will be his last. "Sick, twisted, and very funny. Think Six Feet Under meets the Sopranos." --Ace Atkins "Hilariously obscene! ...as beautifully twisted as anything John Waters ever dreamed up, yet Koster's smooth command of voice and character puts him right up there with the likes of Tarantino and Elmore Leonard. Crime fiction never felt so deliciously dirty."--Joe McKinney, author of Dead City and Mutated106,894 Words