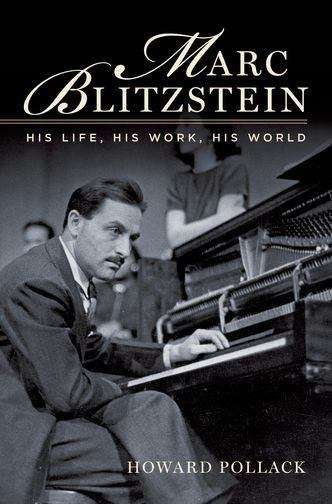 A composer of enormous musical innovation and influence, Marc Blitzstein remains one of the most versatile and fascinating figures in the history of American music, his creative works running the gamut from operas, ballets, musicals, and film scores to orchestral works, chamber pieces, and artsongs. As an open homosexual and a prominent leftist, Blitzstein constantly pushed the boundaries of acceptability in mid-century America in both his music and his life.

Award-winning music historian Howard Pollack's new biography is the first to put Blitzstein's music on equal footing with his politics, theatrical innovation, and other aspects of the composer's life. Pollack covers Blitzstein's life in full, from his childhood in Philadelphia to his violent deathin Martinique at age 58.

The author describes how this student of contemporary luminaries Nadia Boulanger and Arnold Schoenberg became swept up in the stormy political atmosphere of the 1920s and 1930s and throughout his career walked the fine line between his formal training and his democraticprinciples. Indeed, Blitzstein developed a unique sound that drew on everything contemporary, from the high modernism of Stravinsky and Hindemith to blues, jazz, and musical comedy, and that profoundly influenced his younger friend Leonard Bernstein. Pollack captures the astonishing breadth ofBlitzstein's music - from politically controversial Broadway operas like The Cradle Will Rock and No for an Answer, to the patriotic Airborne Symphony, to such masterpieces as the opera Regina, to lesser known early pieces, film scores, and chamber works.

A fearless artist, Blitzsteinadapted BertoltBrecht and Kurt Weill's The Threepenny Opera during the heyday of McCarthyism and the red scare, and with Weill's widow Lotte Lenya, turned it into an off-Broadway sensation. Beautifully written, drawing on new interviews with friends and family of the composer, and making extensive use of new archival and secondary sources, Marc Blitzstein presents the most complete biography of this quintessentially American composer.