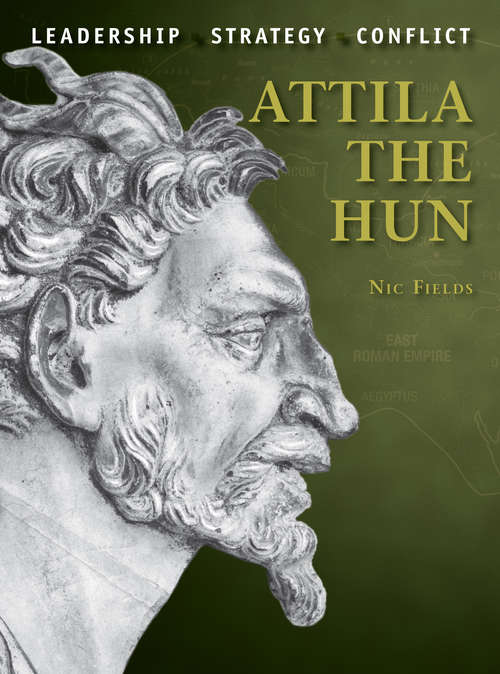 Attila the Hun is one of the iconic figures of history. In a series of epic campaigns dating from the AD 430s till his death in AD 453 he ravaged first the Eatsern Roman Empire and later the Western Roman Empire, invading Italy itself in AD 452 threatening Rome itself.The Huns had moved into Europe in the AD 370s, annexing the territory of the Alans and settling in the Danube region. In AD 433 Rua King of the Huns, died. Rua, an ally of Aetius and the West Romans, was succeeded by his nephews Bleda and Attila. When Attila murdered his brother and ruled alone things began to change. In two campaigns against the Eastern Empire (AD 441-42 and 447) the Huns devastated the Balkans and exacted a heavy tribute. In AD 450 Attila turned his attention to the West. When Attila crossed the Rhine he met very little resistance. Some towns opened their gates to him, others were captured and sacked including Trier, Metz and Reims. Attila's strategy was to keep moving, thereby reducing his logistical problems and, by his devastation of Roman Gaul, force the Western Empire to come to terms with him. He met his major setback at the battle of Chalons in AD 451, also known as the battle of Campus Mauriacus or Catalaunian Plains, when the Roman warlord Flavius Aetius cobble together a hodgepodge force of Visigoths, Franks, Burgundians, Alans, Saxons, Armorican Britons and Romans who together they managed to drive Attila the Hun out of France by defeating his equally mixed army of Huns, Ostrogoths, Gepids, Franks, Rugians, Thuringians, Burgundians.Despite this setback, Attila invaded Italy the following year, sacking and razing the cities of Aquileia, Vicetia, Verona, Brixia, Bergamum and Milan. Having retired to his Carpathian heartland, Attila died in AD 453 and his empire did not long survive him.This new study explores his extraordinary conquests and the abilities that led him to his establish such a far-flung empire.