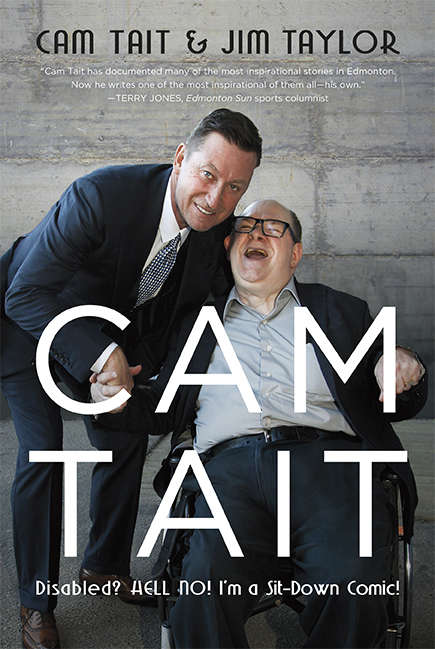 "I have cerebral palsy much like I have blue eyes and have-or should I say had?-brown hair. It is simply a part of who I am. When I speak to groups about my situation I can even joke about it. 'Think of CP as Canada Post,' I tell them. 'My brain sends out signals, and God knows where they wind up.'" Long-time journalist Cam Tait has seen some interesting times on the sports beat-rolling alongside Rick Hansen in the Man in Motion tour, playing in fundraising golf tournaments, and tipping back some cold ones with Wayne Gretzky, to name a few. His personal life hasn't lacked excitement either-memorable moments include parasailing, winning a stand-up (or in his case, sit-down) comedy contest, and helping his grandson take his first steps. But he couldn't have done it without the help of his friends. Tait was born with cerebral palsy, unable to sit up, speak or move his arms and legs. But thanks to a revolutionary form of physical therapy that required a 24/7 commitment from his parents and a team of 116 volunteers, he learned to get around in a wheelchair, move his hands and talk. These turned out to be useful skills for a career of prime interviews, crazy deadlines and pranks. Tait teams up with friend and fellow journalist Jim Taylor, telling his own story with characteristic directness and humour. With a newspaperman's inveterate sense of timing, Tait moves seamlessly from one-liners and tales of debauched hijinks to candid accounts of his depression, career struggles and loss of loved ones. He speaks with eloquence about the importance of giving disabled people the chance to pursue their ambitions, and the value of all the support he's received in achieving his own dreams. In both his career and personal life, he's experienced the power of humour to break down barriers and bring people together-and have a hell of a good time doing it.