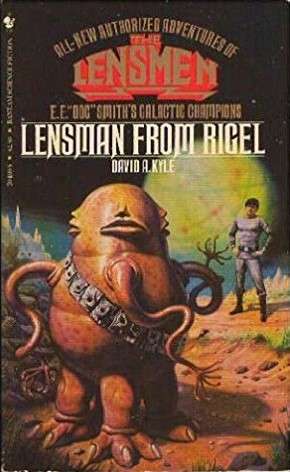 The second of three companion pieces to E.E. "Doc" Smith's magnificent space opera "The Lensmen" series, this novel follows the affairs of the non-human Second Stage Lensman Tregonsee, Director of Intelligence for the Galactic Patrol, as he faces many problems during the consolidation of Civilization in two galaxies after the (apparent) defeat of the evil empire Boskone.

David Kyle was a personal friend of "Doc" Smith's, and received permission from the Smith estate to write three novels concerning the three non-human Lensmen that attained "second stage" status. Most of the characters from the original Lensmen epic are retained, and several new ones are added.

Fans of The Lensmen series might find these companion novels disappointing, as they are not "clones" of the original. The writing style is not as

"slam-bang" as Smith's, the characters have more depth, and the "science" part of the science fiction has been updated to the mid-70's. Nonetheless, they are a very enjoyable and highly competent addition to the Lensen universe.