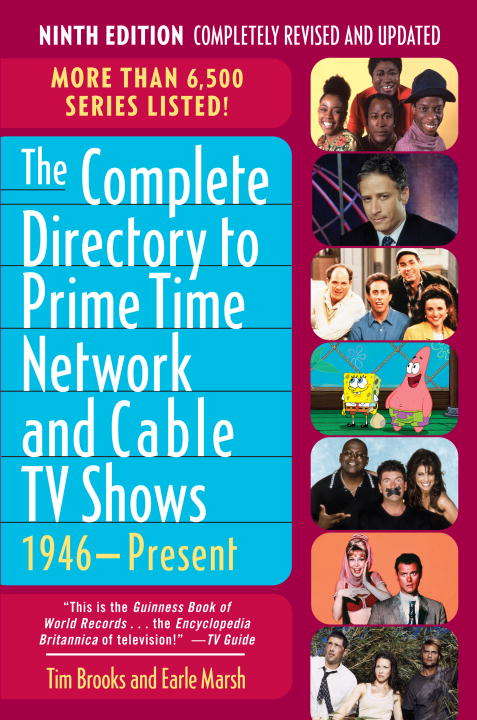 AMERICA'S #1 BESTSELLING TELEVISION BOOK WITH MORE THAN HALF A MILLION COPIES IN PRINT-NOW REVISED AND UPDATED!PROGRAMS FROM ALL SEVEN COMMERCIAL BROADCAST NETWORKS, MORE THAN ONE HUNDRED CABLE NETWORKS, PLUS ALL MAJOR SYNDICATED SHOWS!

This is the must-have book for TV viewers in the new millennium-the entire history of primetime programs in one convenient volume. It's a guide you'll turn to again and again for information on every series ever telecast. There are entries for all the great shows, from evergreens like The Honeymooners, All in the Family, and Happy Days to modern classics like 24, The Office, and Desperate Housewives; all the gripping sci-fi series, from Captain Video and the new Battle Star Galactica to all versions of Star Trek; the popular serials, from Peyton Place and Dallas to Dawson's Creek and Ugly Betty; the reality show phenomena American Idol, Survivor, and The Amazing Race; and the hits on cable, including The Daily Show with Jon Stewart, Top Chef, The Sopranos, Curb Your Enthusiasm, Project Runway, and SpongeBob SquarePants. This comprehensive guide lists every program alphabetically and includes a complete broadcast history, cast, and engaging plot summary-along with exciting behind-the-scenes stories about the shows and the stars.

UPDATES ON CONTINUING SHOWS such as CSI, Gilmore Girls, The Simpsons, and The Real World

EXTENSIVE CABLE COVERAGE with more than 1,000 entries, including a description of the programming on each major cable network

AND DON'T MISS the exclusive and updated "Ph.D. Trivia Quiz" of 200 questions that will challenge even the most ardent TV fan, plus a streamlined guide to TV-related websites for those who want to be constantly up-to-date

SPECIAL FEATURES!* Annual program schedules at a glance for the past 61 years

* Top-rated shows of each season

* A fascinating history of TV

"This is the Guinness Book of World Records . . .the Encyclopedia Britannica of television!"-TV Guide