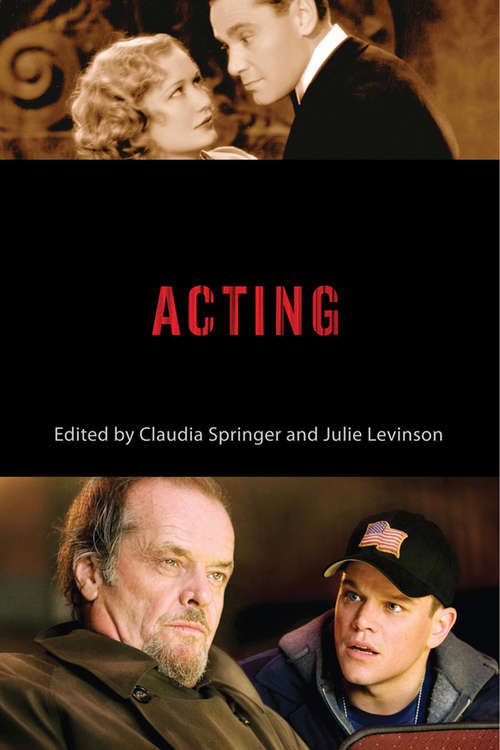 Screen performances entertain and delight us but we rarely stop to consider actors' reliance on their craft to create memorable characters. Although film acting may appear effortless, a host of techniques, artistic conventions, and social factors shape the construction of each role. The chapters in Acting provide a fascinating, in-depth look at the history of film acting, from its inception in 1895 when spectators thrilled at the sight of vaudeville performers, Wild West stars, and athletes captured in motion, to the present when audiences marvel at the seamless blend of human actors with CGI. Experts in the field take readers behind the silver screen to learn about the craft of film acting in six eras: the silent screen (1895-1928), classical Hollywood (1928-1946), postwar Hollywood (1947-1967), the auteur renaissance (1968-1980), the New Hollywood (1981-1999), and the modern entertainment marketplace (2000-present). The contributors pay special attention to definitive performances by notable film stars, including Lillian Gish, Dick Powell, Ginger Rogers, Beulah Bondi, Marilyn Monroe, Marlon Brando, Jack Nicholson, Robert De Niro, Nicholas Cage, Denzel Washington, and Andy Serkis. In six original essays, the contributors to this volume illuminate the dynamic role of acting in the creation and evolving practices of the American film industry. Acting is a volume in the Behind the Silver Screen series--other titles in the series include Animation; Art Direction and Production Design; Cinematography; Costume, Makeup, and Hair; Directing; Editing and Special/Visual Effects; Producing; Screenwriting; and Sound.