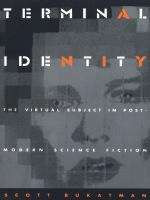 Scott Bukatman's Terminal Identity--referring to both the site of the termination of the conventional "subject" and the birth of a new subjectivity constructed at the computer terminal or television screen--puts to rest any lingering doubts of the significance of science fiction in contemporary cultural studies. Demonstrating a comprehensive knowledge, both of the history of science fiction narrative from its earliest origins, and of cultural theory and philosophy, Bukatman redefines the nature of human identity in the Information Age. Drawing on a wide range of contemporary theories of the postmodern--including Fredric Jameson, Donna Haraway, and Jean Baudrillard--Bukatman begins with the proposition that Western culture is suffering a crisis brought on by advanced electronic technologies. Then in a series of chapters richly supported by analyses of literary texts, visual arts, film, video, television, comics, computer games, and graphics, Bukatman takes the reader on an odyssey that traces the postmodern subject from its current crisis, through its close encounters with technology, and finally to new self-recognition. This new "virtual subject," as Bukatman defines it, situates the human and the technological as coexistent, codependent, and mutally defining.Synthesizing the most provocative theories of postmodern culture with a truly encyclopedic treatment of the relevant media, this volume sets a new standard in the study of science fiction--a category that itself may be redefined in light of this work. Bukatman not only offers the most detailed map to date of the intellectual terrain of postmodern technology studies--he arrives at new frontiers, providing a propitious launching point for further inquiries into the relationship of electronic technology and culture.