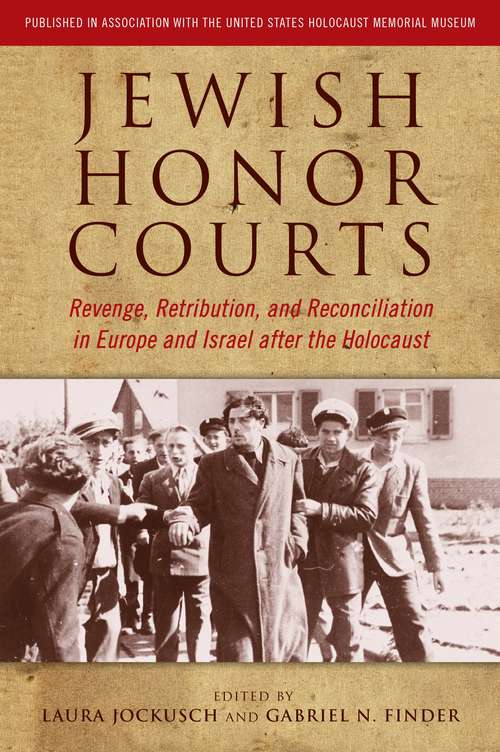 In the aftermath of World War II, virtually all European countries struggled with the dilemma of citizens who had collaborated with Nazi occupiers. Jewish communities in particular faced the difficult task of confronting collaborators among their own ranks--those who had served on Jewish councils, worked as ghetto police, or acted as informants. European Jews established their own tribunals--honor courts--for dealing with these crimes, while Israel held dozens of court cases against alleged collaborators under a law passed two years after its founding. In Jewish Honor Courts: Revenge, Retribution, and Reconciliation in Europe and Israel after the Holocaust, editors Laura Jockusch and Gabriel N. Finder bring together scholars of Jewish social, cultural, political, and legal history to examine this little-studied and fascinating postwar chapter of Jewish history.

The volume begins by presenting the rationale for punishing wartime collaborators and purging them from Jewish society. Contributors go on to examine specific honor court cases in Allied-occupied Germany and Austria, Poland, the Netherlands, and France. One essay also considers the absence of an honor court in Belgium. Additional chapters detail the process by which collaborators were accused and brought to trial, the treatment of women in honor courts, and the unique political and social place of honor courts in the nascent state of Israel. Taken as a whole, the essays in Jewish Honor Courts illustrate the great caution and integrity brought to the agonizing task of identifying and punishing collaborators, a process that helped survivors to reclaim their agency, reassert their dignity, and work through their traumatic experiences.

For many years, the honor courts have been viewed as a taboo subject, leaving their hundreds of cases unstudied. Jewish Honor Courts uncovers this forgotten chapter of Jewish history and shows it to be an integral part of postwar Jewish rebuilding. Scholars of Jewish, European, and Israeli history as well as readers interested in issues of legal and social justice will be grateful for this detailed volume.