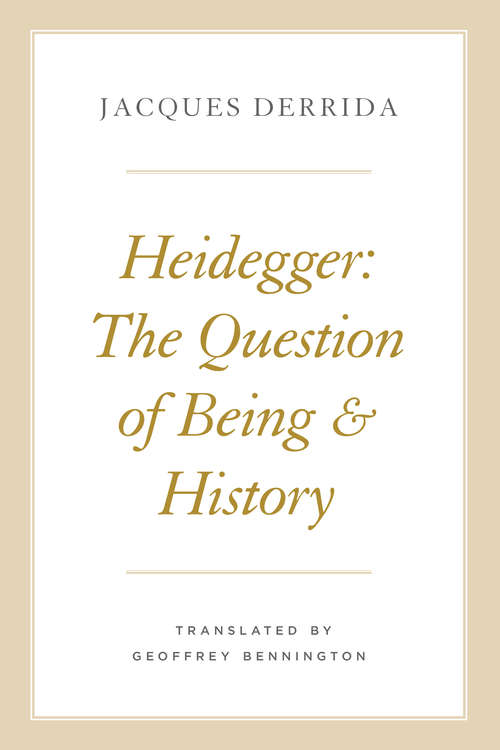 Few philosophers held greater fascination for Jacques Derrida than Martin Heidegger, and in this book we get an extended look at Derrida's first real encounters with him. Delivered over nine sessions in 1964 and 1965 at the École Normale Supérieure, these lectures offer a glimpse of the young Derrida first coming to terms with the German philosopher and his magnum opus, Being and Time. They provide not only crucial insight into the gestation of some of Derrida's primary conceptual concerns--indeed, it is here that he first uses, with some hesitation, the word "deconstruction"--but an analysis of Being and Time that is of extraordinary value to readers of Heidegger or anyone interested in modern philosophy.

Derrida performs an almost surgical reading of the notoriously difficult text, marrying pedagogical clarity with patient rigor and acting as a lucid guide through the thickets of Heidegger's prose. At this time in intellectual history, Heidegger was still somewhat unfamiliar to French readers, and Being and Time had only been partially translated into French. Here Derrida mostly uses his own translations, giving his own reading of Heidegger that directly challenges the French existential reception initiated earlier by Sartre. He focuses especially on Heidegger's Destruktion (which Derrida would translate both into "solicitation" and "deconstruction") of the history of ontology, and indeed of ontology as such, concentrating on passages that call for a rethinking of the place of history in the question of being, and developing a radical account of the place of metaphoricity in Heidegger's thinking.

This is a rare window onto Derrida's formative years, and in it we can already see the philosopher we've come to recognize--one characterized by a bravura of exegesis and an inventiveness of thought that are particularly and singularly his.