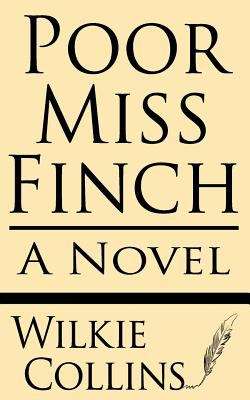 Poor Miss Finch: a novel By Wilkie Collins Contents I-Madame Pratolungo presents herself II-Madam Pratolungo makes a voyage on land III-Poor Miss Finch IV-Twilight view of the man V-Candlelight view of the man VI-A cage of finches VII-Daylight view of the man VIII-The perjury of the clock IX-The hero of the trial X-First appearance of Jicks XI-Blind love XII-Mr. Finch smells money XIII-Second appearance of Jicks XIV-Discoveries at Browndown XV-Events at the bedside XVI-First result of the robbery XVII-The doctor's opinion XVIII-Family troubles XIX-Second result of the robbery XX-Good Papa again! XXI-Madame Pratolungo returns to Dimchurch XXII-The twin-brother's letter XXIII-He sets us all right XXIV-He sees Lucilla Excerpt from Chapter I You are here invited to read the story of an event which occurred in an out-of-the-way corner of England, some years since. The persons principally concerned in the event are: --a blind girl; two (twin) brothers; a skilled surgeon; and a curious foreign woman. I am the curious foreign woman. And I take it on myself--for-reasons which will presently appear--to tell the story. So far we understand each other. Good. I may make myself known to you as briefly as I can. I am Madame Pratolungo--widow of that celebrated South American patriot, Doctor Pratolungo. I am French by birth. Before I married the Doctor, I went through many vicissitudes in my own country. They ended in leaving me (at an age which is of no consequence to anybody) with some experience of the world; with a cultivated musical talent on the pianoforte; and with a comfortable little fortune unexpectedly bequeathed to me by a relative of my dead dead mother (which fortune I shared with good Papa and with my younger sisters). To these qualifications I added another, the most precious of all, when I married the Doctor; namely--a strong infusion of ultra-liberal principles. "Vive la Republique!" Some people do one thing, and some do another, in the way of celebrating the event of their marriage. Having become man and wife, Doctor Pratolungo and I took ship to Central America--and devoted our honeymoon, in those disturbed districts, to the sacred duty of destroying tyrants. Ah! the vital air of my noble husband was the air of revolutions. From his youth upwards he had followed the glorious profession of Patriot. Wherever the people of the Southern New World rose and declared their independence--and, in my time, that fervent population did nothing else--there was the Doctor self-devoted on the altar of his adopted country. He had been fifteen times exiled, and. . . ------------------------------------------------------------------------------------------------------------------------------------------ Windham Press is committed to bringing the lost cultural heritage of ages past into the 21st century through high-quality reproductions of original, classic printed works at affordable prices. This book has been carefully crafted to utilize the original images of antique books rather than error-prone OCR text. This also preserves the work of the original typesetters of these classics, unknown craftsmen who laid out the text, often by hand, of each and every page you will read. Their subtle art involving judgment and interaction with the text is in many ways superior and more human than the mechanical methods utilized today, and gave each book a unique, hand-crafted feel in its text that connected the reader organically to the art of bindery and book-making. We think these benefits are worth the occasional imperfection resulting from the age of these books at the time of scanning, and their vintage feel provides a connection to the past that goes beyond the mere words of the text.