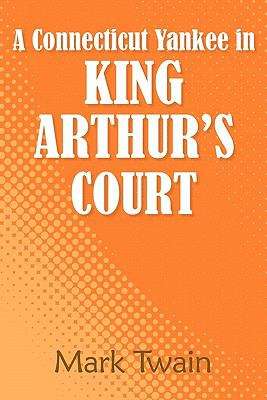 You might wonder what prompted Mark Twain to sidle from ""straight"" fiction into the realm of outright fantasy. Twain transports a Connecticut shop foreman twelve centuries into the past [and 5 000 kilometres!] to Camelot and Arthur's court.

Initially confused and dismayed, Hank Morgan's Yankee practicality is quickly aroused and he becomes a major figure among the panopolied knights. With the title of The Boss, his rank equals The King or The Pope with its uniqueness. His elevation doesn't distract him from a more profound impulse, however. Hank's Yankee roots and wide experience evoke an ambition - nothing less than revolution. He wants to sweep away the monarchy and aristocracy and establish an American-style republic in Arthurian Britain. Mark Twain's scathing criticism of the sham of hereditary monarchy bolstered by an Established Church makes this among his choicest writings. He resents the condition of a Church which ""turned a nation of men into a nation of worms. "" A fervent believer in individual freedom, Twain uses Hank to voice his disdain of Britain's royalty. It's no more than might be expected of a man who boasted of but one ancestor - who sat on the jury that executed Charles I. Hank knows revolutions never succeed when implemented from above. Revolution be achieved only when the individual's attitude changes from meek acceptance to self assertion. Hank's method reaches people through clandestine schools and factories, publication of a newspaper and establishment of a telephone system. These new forms of manufacture and communication become the foundation by which Hank expects to abolish the ancient, mis-named, chivalric tradition. Does he change the course of history? Twain relocates the roots of American democracy from the heart of the frontier yeoman farmer to the brain of the urban industrial worker. Here the man of wide, practical experience shows how to survive compared to those with a formal education. Hank has a simple ambition - establishment of a republic - but utilizes a broad spectrum of ideas to bring it about. He would gladly replace the Established Church of Rome with his own Presbyterian ideals, but is aware that it would be swapping one evil for another. ""Each man should select his own religion, or make one"" he contends. Yet, finally, it is this dread force that impairs his desire for change. The final sequence stands as a peer to the biblical Armageddon, Twain wallowing in a frightful bloodletting unseen in any of his other works. Mark Twain contrasts the Reign of Terror of the French Revolution with the centuries of slavery, serfdom, and poverty that killed countless more people than that spasm of excising of aristocracy. What else spurred him to write of human rights with such passion? He had written of slavery before, but this book is especially wrathful in describing the ""peculiar institution"" eliminated in his homeland but a generation before. He forces the king to experience the slave's condition, a form of degradation he would have all aristocrats endure. Every feature of the human condition is examined in this timeless treasure. He challenges you to follow his gaze, considering whether today's societies, monarchical or not, will endure the scrutiny.