The Biopolitics of Development 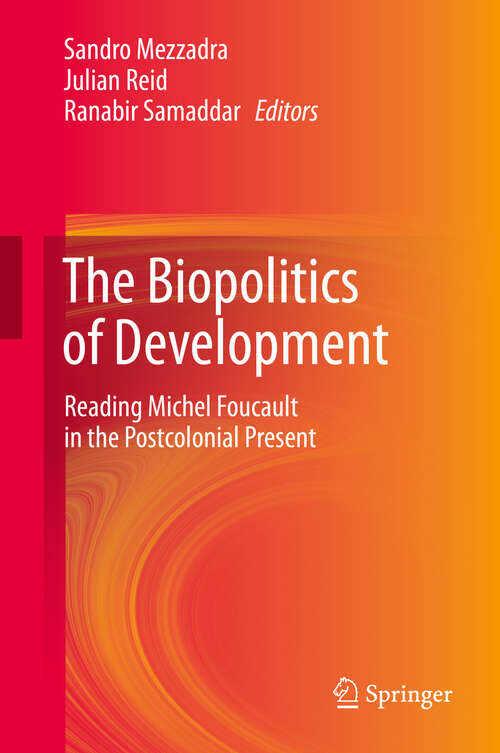 This book offers an original analysis and theorization of the biopolitics of development in the postcolonial present, and draws significantly from the later works of Michel Foucault on biopolitics. Foucault's works have had a massive influence on postcolonial literatures, particularly in political science and international relations, and several authors of this book have themselves made significant contributions to that influence. While Foucault's thought has been inspirational for understanding colonial biopolitics as well as governmental rationalities concerned with development, his works have too often failed to inspire studies of political subjectivity. Instead, they have been used to stoke the myth of the inevitability of the decline of collective political subjects, often describing an increasingly limited horizon of political possibilities, and provoking a disenchantment with the political itself in postcolonial works and studies. Working against the grain of current Foucauldian scholarship, this book underlines the importance of Foucault's work for the capacity to recognize how this degraded view of political subjectivity came about, particularly within the framework of the discourses and politics of 'development', and with particular attention to the predicaments of postcolonial peoples. It explores how we can use Foucault's ideas to recover the vital capacity to think and act politically at a time when fundamentally human capacities to think, know and to act purposively in the world are being pathologized as expressions of the hubris and 'underdevelopment' of postcolonial peoples. Why and how it is that life in postcolonial settings has been depoliticized to such dramatic effect? The immediacy of these themes will be obvious to anyone living in the South of the world. But within the academy they remain heavily under-addressed. In thinking about what it means to read Michel Foucault today, this book tackles some significant questions and problems: Not simply that of how to explain the ways in which postcolonial regimes of governance have achieved the debasements of political subjectivity they have; nor that of how we might better equip them with the means to suborn the life of postcolonial peoples more fully; but that of how such peoples, in their subjection to governance, can and do resist, subvert, escape and defy the imposition of modes of governance which seek to remove their lives of those very capacities for resistance, subversion, flight, and defiance.