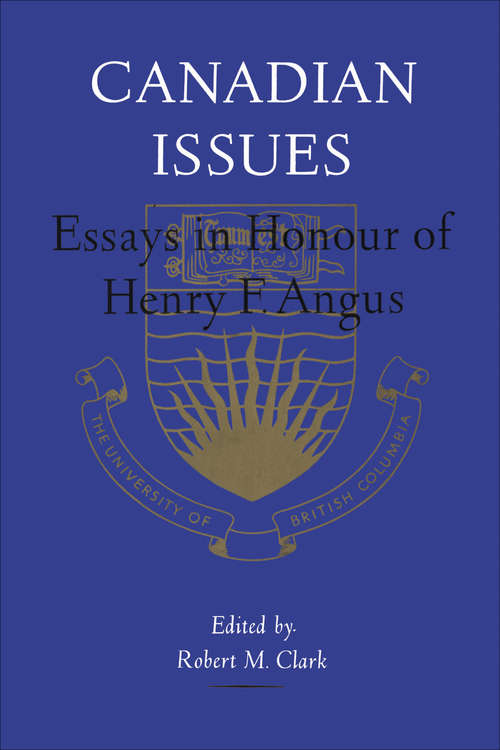 Topics of widespread concern to Canadians interested in the social

by a group of Canada's leading scholars in political science and history. The

book is presented in honour of Henry Forbes Angus, Head of the Department of

Economics, Political Science, and Sociology at the University of British Columbia

from 1930 to 1956, and the authors are all his former students, colleagues or

associates. Included also are a bibliography of publications Dean Angus and, with

his consent, a thoughtful and humorous article of his entitled "Administration

and Democracy." Henry Forbes Angus was born in Victoria, in 1891.

He received his school education in Victoria and subsequently attended the

Lycée Descartes at Tours (France) and McGill University from which he

received his B.A. in 1911. He proceeded to Balliol College, Oxford where he obtained

highly prized Vinerian Law Scholarship at Oxford in 1914, and was called to the

Inner Temple Bar in the same year.Henry Angus served throughout the First

promoted to the rank of Captain and mentioned in despatches. He returned to British

Columbia after the war, and in 1919 was appointed Assistant Professor of Economics

at the University of British Columbia. In the same year he obtained his M.A. from

Oxford. He was promoted Head of the Department of Economics, Political Science and

Studies.Professor Angus was made a Fellow of the Royal Society of Canada in

University and from the University of British Columbia. He was a member of the Royal

Commission on Dominion-Provincial Relations, 1937-40, and a member of the Royal

the Under Secretary of State for External Affairs.Since 1955, Dean Angus has

been Chairman of the Public Utilities Commission of British Columbia.