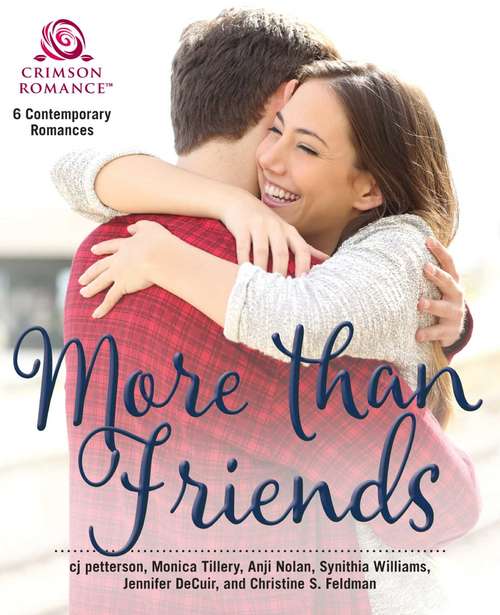 What are friends for? In these six sexy stories, BFFs discover there's more to friendship than a few pats on the back and lending a shoulder to cry on when things get rough:Choosing Carter: When Bryn McKay's brother escapes from prison bent on revenge, she invites her best friend, naturalist and outdoor guide Carter Danielson, away on a weekend rafting trip to help her de-stress--and she wouldn't mind if things turned romantic. Carter is a recovering alcoholic who shies away from commitment despite his confusing feelings for Bryn. Then her brother shows up and they must flee for their lives. Will imminent danger prompt Carter to finally figure out where his heart lies?Sweet Texas Kiss: Gavin Cooper can't wrap his mind around why country music superstar Macy Young would end up inheriting his family home. Seeing his childhood memories handed over to the first woman to break his heart stings. Luckily, Macy can't sell the house for one year--plenty of time for him to find a way to get it back. Can a country star and a country veterinarian find a way to bury their animosity and rediscover their first love in the process?Desperate Obsession: Jake Fowler lost his girl, Alex Mack, to a fast-talking pilot, but now, as a special branch detective at London's Heathrow airport, he's discovered his rival is a courier for a terrorist organization. As Alex becomes embroiled in the operation, Jake must convince her that his suspicions stem from more than jealousy--before she's in too deep to get out.Just My Type: Janiyah Henderson enjoys her stress-free post-college life, but when her dad insists she can't handle a "real job," she's determined to prove him wrong. Her high-spirited ways clash with the conservative instincts of her new boss, accountant Fredrick Jenkins, yet attraction brews between them. When Fredrick shows Janiyah the man behind the numbers, she realizes she could be just the type of woman he needs.Wynter's Journey: Tragedy tore Wynter and Sam apart before he could tell her how he felt about her. Now fate has dropped her off on his doorstep, widowed, desperately broke, and very pregnant. His sense of honor dictates that he take her in, but soon old feelings resurface. Now the one person he'd wanted to leave behind is the one person he can't let go.Coming Home: No woman ever really forgets her first love. Callie Sorenson's was tall, tanned, and--as her older brother's best friend--completely off limits. But now fate has brought her back home, where Callie quickly realizes that old feelings die hard. Can Danny McCutcheon win over the woman she's become?Sensuality Level: Sensual