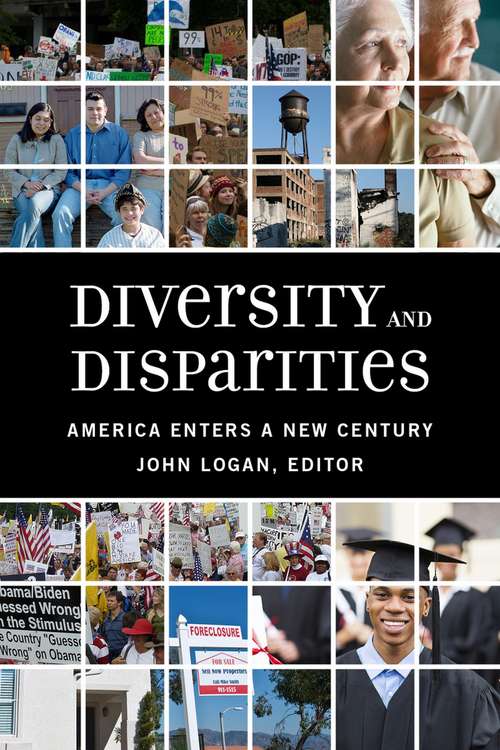 The United States is more diverse than ever before. Increased immigration has added to a vibrant cultural fabric, and women and minorities have made significant strides in overcoming overt discrimination. At the same time, economic inequality has increased significantly in recent decades, and the Great Recession substantially weakened the economic standing not only of the poor but also of the middle class. Diversity and Disparities, edited by sociologist John Logan, assembles impressive new studies that interpret the social and economic changes in the United States over the last decade. The authors, leading social scientists from many disciplines, analyze changes in the labor market, family structure, immigration, and race. They find that while America has grown more diverse, the opportunities available to disadvantaged groups have become more unequal.

Drawing on detailed data from the decennial census, the American Community Survey, and other sources, the authors chart the growing diversity and the deepening disparities among different groups in the United States Harry J. Holzer and Marek Hlavac document that although the economy always rises and falls over the business cycle, the Great Recession of 2007–2009 was a catastrophic event that saw record levels of unemployment, especially among less-educated workers, young people, and minorities. Emily Rosenbaum shows how the Great Recession amplified disparities in access to home ownership, and demonstrates that young adults, especially African Americans, are falling behind previous cohorts not only in home ownership and wealth but even in starting their own families and households.

Sean F. Reardon and Kendra Bischoff explore the rise of class segregation as higher-income Americans are moving away from others into separate and privileged neighborhoods and communities. Immigration has also seen class polarization, with an increase in both highly skilled workers and undocumented immigrants. As Frank D. Bean and his colleagues show, the lack of a path to legal status for undocumented immigrants inhibits the educational and economic opportunities for their children and grandchildren. Barrett Lee and colleagues demonstrate that the nation and most cities and towns are becoming more diverse by race and ethnicity. However, while black-white segregation is slowly falling, Hispanics and Asians remain as segregated today as they were in 1980.

Diversity and Disparities raises concerns about the extent of socioeconomic immobility in the United States today. This volume provides valuable information for policymakers, journalists, and researchers seeking to understand the current state of the nation.