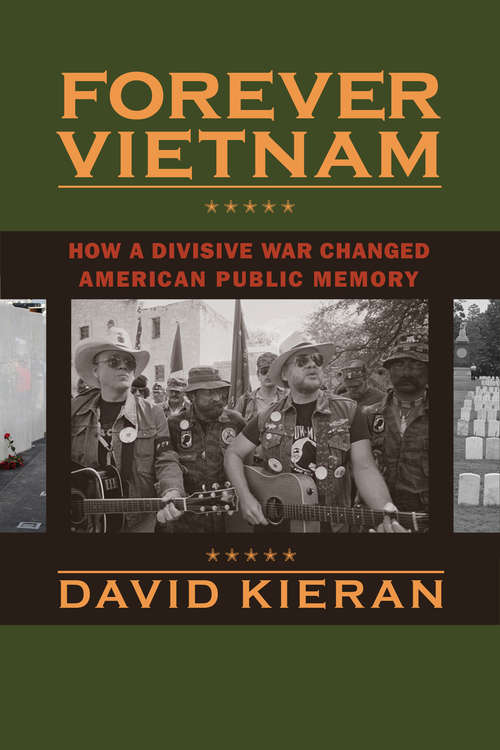 Four decades after its end, the American war in Vietnam still haunts the nation’s collective memory. Its lessons, real and imagined, continue to shape government policies and military strategies, while the divisions it spawned infect domestic politics and fuel the so-called culture wars. In Forever Vietnam, David Kieran shows how the contested memory of the Vietnam War has affected the commemoration of other events, and how those acts of remembrance have influenced postwar debates over the conduct and consequences of American foreign policy.

Kieran focuses his analysis on the recent remembrance of six events, three of which occurred before the Vietnam War and three after it ended. The first group includes the siege of the Alamo in 1836, the incarceration of Union troops at Andersonville during the Civil War, and the experience of American combat troops during World War II. The second comprises the 1993 U.S. intervention in Somalia, the crash of United Airlines Flight 93 on September 11, 2001, and the Iraq and Afghanistan wars.

In each case a range of actors—military veterans, policymakers, memorial planners, and the general public—used memorial practices associated with the Vietnam War to reinterpret the contemporary significance of past events. A PBS program about Andersonville sought to cultivate a sense of national responsibility for the My Lai massacre. A group of Vietnam veterans occupied the Alamo in 1985, seeing themselves as patriotic heirs to another lost cause. A World War II veteran published a memoir in 1980 that reads like a narrative of combat in Vietnam. Through these and other examples, Forever Vietnam reveals not only the persistence of the past in public memory but also its malleability in the service of the political present.