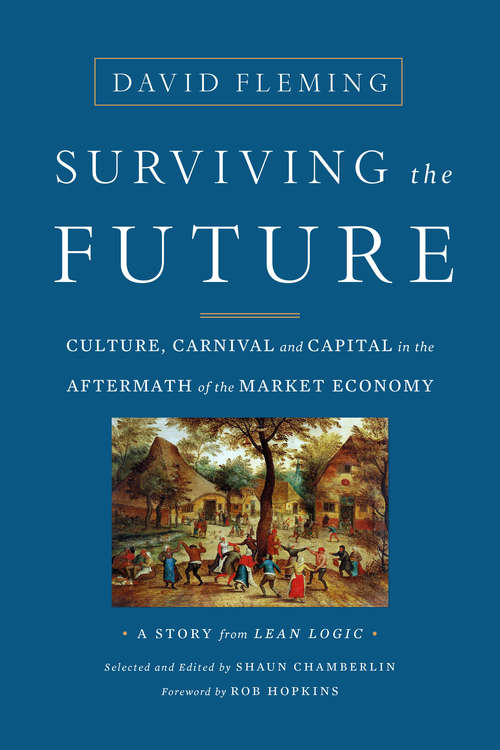 Surviving the Future is a story drawn from the fertile ground of the late David Fleming's extraordinary Lean Logic: A Dictionary for the Future and How to Survive It. That hardback consists of four hundred and seventy-two interlinked dictionary entries, inviting readers to choose their own path through its radical vision.

Recognizing that Lean Logic's sheer size and unusual structure can be daunting, Fleming's long-time collaborator Shaun Chamberlin has selected and edited one of these potential narratives to create Surviving the Future. The content, rare insights, and uniquely enjoyably writing style remain Fleming's, but are presented here at a more accessible paperback-length and in conventional read-it-front-to-back format.

The subtitle--Culture, Carnival and Capital in the Aftermath of the Market Economy--hints at Fleming's vision. He believed that the market economy will not survive its inherent flaws beyond the early decades of this century, and that its failure will bring great challenges, but he did not dwell on this: "We know what we need to do. We need to build the sequel, to draw on inspiration which has lain dormant, like the seed beneath the snow."

Surviving the Future lays out a compelling and powerfully different new economics for a post-growth world. One that relies not on taut competitiveness and eternally increasing productivity--"putting the grim into reality"--but on the play, humor, conversation, and reciprocal obligations of a rich culture. Building on a remarkable breadth of intellectual and cultural heritage--from Keynes to Kumar, Homer to Huxley, Mumford to MacIntyre, Scruton to Shiva, Shakespeare to Schumacher--Fleming describes a world in which, as he says, "there will be time for music."

This is the world that many of us want to live in, yet we are told it is idealistic and unrealistic. With an evident mastery of both economic theory and historical precedent, Fleming shows that it is not only desirable, but actually the only system with a realistic claim to longevity. With friendliness, humor, and charm, Surviving the Future plucks this vision out of our daydreams and shows us how to make it real.

Copyright:
2016 The Estate of David Fleming