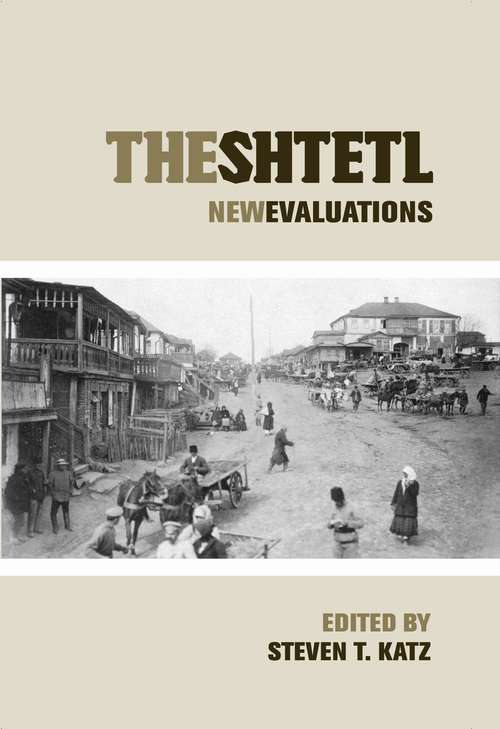 Dating from the sixteenth century, there were hundreds of shtetls--Jewish settlements--in Eastern Europe that were home to a large and compact population that differed from their gentile, mostly peasant neighbors in religion, occupation, language, and culture. The shtetls were different in important respects from previous types of Jewish settlements in the Diaspora in that Jews had rarely formed a majority in the towns in which they lived. This was not true of the shtetl, where Jews sometimes comprised 80% or more of the population. While the shtetl began to decline during the course of the nineteenth century, it was the Holocaust which finally destroyed it.During the last thirty years the shtetl has attracted a growing amount of scholarly attention, though gross generalizations and romanticized nostalgia continue to affect how the topic is treated. This volume takes a new look at this most important facet of East European Jewish life. It helps to correct the notion that the shtetl was an entirely Jewish world and shows the ways in which the Jews of the shtetl interacted both with their co-religionists and with their gentile neighbors. The volume includes chapters on the history of the shtetl, its myths and realities, politics, gender dynamics, how the shtetl has been (mis)represented in literature, and the changes brought about by World War I and the Holocaust, among others. Contributors: Samuel Kassow, Gershon David Hundert, Immanuel Etkes, Nehemia Polen, Henry Abramson, Konrad Zielinski, Jeremy Dauber, Israel Bartel, Naomi Seidman, Mikhail Krutikov, Arnold J. Band, Katarzyna Wieclawska, Yehunda Bauer, and Elie Wiesel.This is the first book published in the Elie Wiesel Center for Judaic Studies Series.