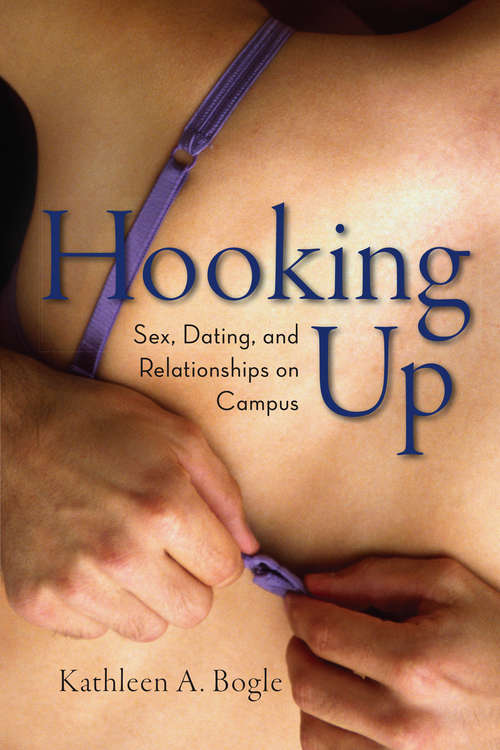 Listen to her NPR InterviewThe Sociology of "Hooking Up": Author Interview on Inside Higher EdNewsweek: Campus SexpertsWatch Bogle's interview on CBS-->Hookup culture creates unfamiliar environment - to parents, at leastHooking Up: What Educators Need to Know - An op-ed on CHE by the authorIt happens every weekend: In a haze of hormones and alcohol, groups of male and female college students meet at a frat party, a bar, or hanging out in a dorm room, and then hook up for an evening of sex first, questions later. As casually as the sexual encounter begins, so it often ends with no strings attached; after all, it was "just a hook up." While a hook up might mean anything from kissing to oral sex to going all the way, the lack of commitment is paramount.Hooking Up is an intimate look at how and why college students get together, what hooking up means to them, and why it has replaced dating on college campuses. In surprisingly frank interviews, students reveal the circumstances that have led to the rise of the booty call and the death of dinner-and-a-movie. Whether it is an expression of postfeminist independence or a form of youthful rebellion, hooking up has become the only game in town on many campuses.In Hooking Up, Kathleen A. Bogle argues that college life itself promotes casual relationships among students on campus. The book sheds light on everything from the differences in what young men and women want from a hook up to why freshmen girls are more likely to hook up than their upper-class sisters and the effects this period has on the sexual and romantic relationships of both men and women after college. Importantly, she shows us that the standards for young men and women are not as different as they used to be, as women talk about "friends with benefits" and "one and done" hook ups.Breaking through many misconceptions about casual sex on college campuses, Hooking Up is the first book to understand the new sexual culture on its own terms, with vivid real-life stories of young men and women as they navigate the newest sexual revolution.