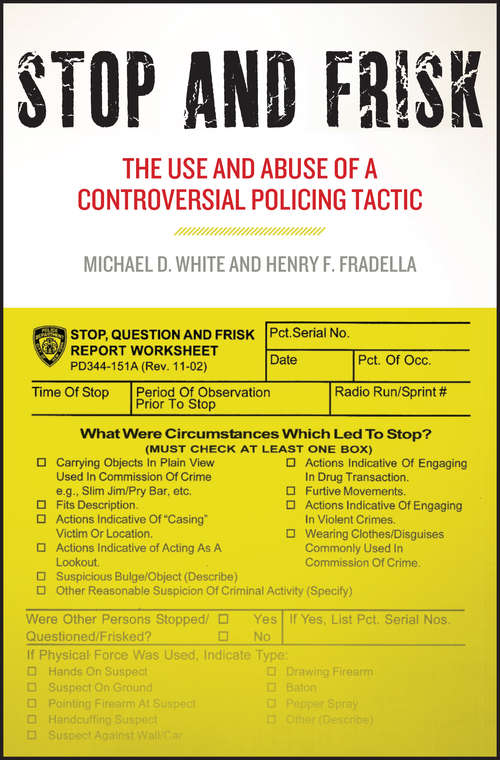 No policing tactic has been more controversial than "stop and frisk," whereby police officers stop, question and frisk ordinary citizens, who they may view as potential suspects, on the streets. As Michael White and Hank Fradella show in Stop and Frisk, the first authoritative history and analysis of this tactic, there is a disconnect between our everyday understanding and the historical and legal foundations for this policing strategy. First ruled constitutional in 1968, stop and frisk would go on to become a central tactic of modern day policing, particularly by the New York City Police Department. By 2011 the NYPD recorded 685,000 'stop-question-and-frisk' interactions with citizens; yet, in 2013, a landmark decision ruled that the police had over- and mis-used this tactic. Stop and Frisk tells the story of how and why this happened, and offers ways that police departments can better serve their citizens. They also offer a convincing argument that stop and frisk did not contribute as greatly to the drop in New York's crime rates as many proponents, like former NYPD Police Commissioner Ray Kelly and Mayor Michael Bloomberg, have argued. While much of the book focuses on the NYPD's use of stop and frisk, examples are also shown from police departments around the country, including Philadelphia, Baltimore, Chicago, Newark and Detroit. White and Fradella argue that not only does stop and frisk have a legal place in 21st-century policing but also that it can be judiciously used to help deter crime in a way that respects the rights and needs of citizens. They also offer insight into the history of racial injustice that has all too often been a feature of American policing's history and propose concrete strategies that every police department can follow to improve the way they police. A hard-hitting yet nuanced analysis, Stop and Frisk shows how the tactic can be a just act of policing and, in turn, shows how to police in the best interest of citizens.