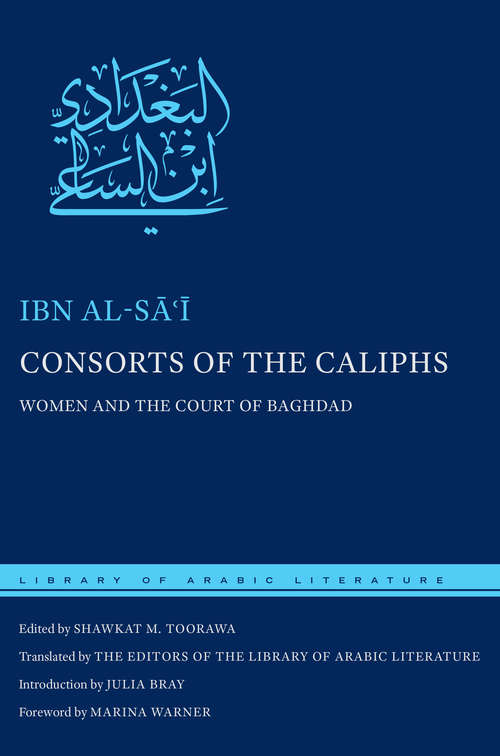 Consorts of the Caliphs is a seventh/thirteenth-century compilation of anecdotes about thirty-eight women who were, as the title suggests, consorts to those in power, most of them concubines of the early Abbasid caliphs and wives of latter-day caliphs and sultans. This slim but illuminating volume is one of the few surviving texts by Ibn al-Saʿi (d. 674 H/1276 AD). Ibn al-Saʿi was a prolific Baghdadi scholar who chronicled the academic and political elites of his city, and whose career straddled the final years of the Abbasid dynasty and the period following the cataclysmic Mongol invasion of 656 H/1258 AD.

In this work, Ibn al-Saʿi is keen to forge a connection between the munificent wives of his time and the storied lovers of the so-called golden age of Baghdad. Thus, from the earlier period, we find Harun al-Rashid pining for his brother's beautiful slave, Ghadir, and the artistry of such musical and literary celebrities as ʿArib and Fadl, who bested the male poets and singers of their day. From times closer to Ibn al-Saʿi's own--when Abbasid authority was trying to reassert itself and Baghdad was again a major center of intellectual and religious activity--we meet women such as Banafsha, who endowed law colleges, had bridges built, and provisioned pilgrims bound for Mecca; slave women whose funeral services were led by caliphs; and noble Saljuq princesses from Afghanistan.

Informed by the author's own sources, his insider knowledge, and well-known literary materials, these singular biographical sketches, though delivered episodically, bring the belletristic culture of the Baghdad court to life, particularly in the personal narratives and poetry of culture heroines otherwise lost to history.