The Sisters of Bethlehem Springs Collection 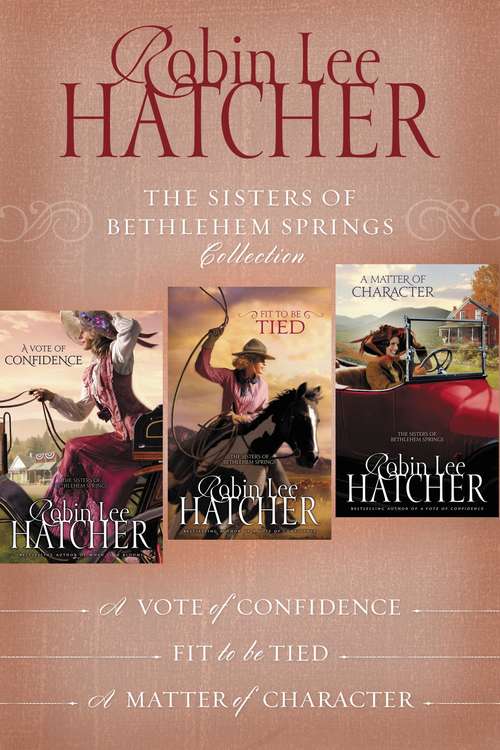 A Vote of Confidence

In A Vote of Confidence, the stage is set for some intriguing insight into what it was like during 1915 to be a woman in a “man’s world.” Guinevere Arlington is a beautiful young woman determined to remain in charge of her own life. For seven years, Gwen has carved out a full life in the bustling town of Bethlehem Springs, Idaho, where she teaches piano and writes for the local newspaper. Her passion for the town, its people, and the surrounding land prompt Gwen to run for mayor. After all, who says a woman can’t do a man’s job? But stepping outside the boundaries of convention can get messy. A shady lawyer backs Gwen, believing he can control her once she’s in office. A wealthy newcomer throws his hat into the ring in an effort to overcome opposition to the health resort he’s building north of town. When the opponents fall in love, everything changes, forcing Gwen to face what she may have to lose in order to win.

Fit to be Tied

It’s 1916, and Idaho rancher Cleo Arlington knows everything about horses but nothing about men. So when charged with transforming English aristocrat Sherwood Statham from playboy into cowboy, she’s totally disconcerted. So is Statham, who’s never encountered a woman succeeding in a “man’s world.” Their bumpy trot into romance is frustrating, exhilarating, and ultimately heartwarming.

A Matter of Character

The Sisters of Bethlehem Springs series delivers exactly what readers have been waiting for—smart, confident women who are not afraid to defy convention, live their own dreams, and share their lives if the right man comes along. In A Matter of Character, book three in the Sisters of Bethlehem Springs series, it's 1918, and Daphne McKinley, heiress to a small fortune, has found contentment in the town of Bethlehem Springs. But Daphne has a secret. A series of dime novels loosely based on local lore and featuring a nefarious villain known as Rawhide Rick has enjoyed modest popularity among readers. Nobody in Bethlehem Springs knows the man behind the stories . . . except Daphne. When newspaperman Joshua Crawford comes to town searching for the man who sullied the good name of his grandfather, Daphne finds herself at a crossroads, reassessing the power of her words, re-thinking how best to honor her gifts, and reconsidering what she wants out of life.