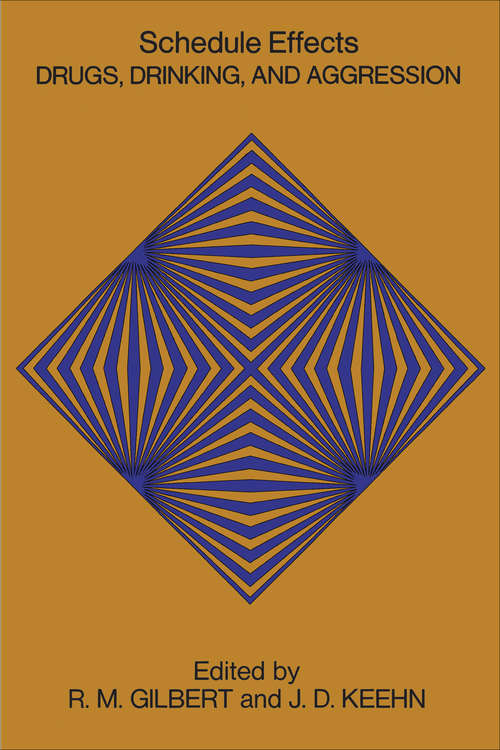 In Toronto in 1970 the Addiction Research Foundation held a symposium on schedule-induced and schedule-dependent phenomena. The Foundation's main concerns with drug-behaviour-environment interactions, but because it is difficult to consider these interactions in isolation from general behavioural phenomena, the symposium was arranged around topics that are not specific to drug effects. This book contains those contributions to the symposium that focused on phenomena associated with schedules of reinforcement. Most of the papers have been extensively revised for the purpose of this publication.

Three kinds of schedule effect are examined in the book. Schedule dependent phenomena arise when the effect on behaviour of an operation, such as the administration of a drug, depends on the schedule of reinforcement maintaining the behaviour. Two aspects of these phenomena are treated in detail by J.W. McKearney, who emphasizes drug effects, and by D.E. Blackman, who concentrates on the intrusion of stimuli that signal electric shock. A second kind of schedule effect is discussed by T. Thompson and R. Pickens, who show that reinforcing drugs are subject to scheduling variables, in common with other reinforcements.

The remaining chapters focus on schedule-induced phenomena, although other schedule effects are also considered. Behaviour is schedule-induced when it occurs as the result of the application of a reinforcement schedule to other behaviour without being specified in that schedule. J.D. Keehn discusses these phenomena in the context of behaviour that cannot be accounted for in terms of the simple reinforcement model. T.D. Hawkins and his collaborators report a series of hitherto unpublished experiments, including work on alcohol intoxication as a schedule-induced phenomenon. J.L. Falk reviews the studies of schedule induced behaviour, which he labels adjunctive, and provides an account that recognizes ethological analyses of related phenomena, a feature too of the chapter by W. Wuttke and N.K. Innis.

The two final chapters are concerned with aggression induced by scheduling and other factors. R.R. Hutchinson and G. Emley examine the temporal relationships of the different kinds of behaviour that can occur when electric shock is delivered at frequent intervals, and describes the effects of various drugs on these relationships. R. Ulrich and his colleagues provide a comprehensive review of shock-induced aggression and its controlling variables.

The book will be of interest to advanced students and professionals in psychology, pharmacology, and related disciplines.