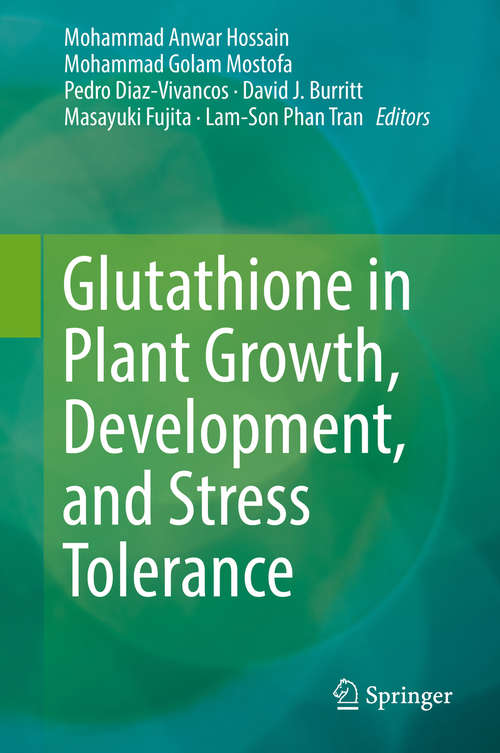 Glutathione (γ-glutamyl-cysteinyl-glycine; GSH), a ubiquitously distributed sulfur containing antioxidant molecule, serves as a crucial player in regulating plant growth, development and abiotic stress tolerance. It is one of the most powerful low-molecular weight thiols and rapidly accumulates in plant and animal cells under stress. Recent in-depth studies on GSH homeostasis (synthesis, degradation, compartmentation, transport, and redox turnover) and the role of GSH in cell proliferation and abiotic stress tolerance have created opportunities for plant biologists to conduct research aimed at deciphering mechanisms associated with GSH-mediated plant growth and stress responses. GSH has also been proposed as a potential regulator of epigenetic gene regulation and so GSH might play important roles in the environmental regulation of gene expression in plants. The dynamic relationship between GSH and reactive oxygen species (ROS) has been well documented and GSH has been shown to participate in numerous metabolic and cell signaling processes, including protein synthesis and amino acid transport, DNA repair, and the control of cell division and programmed cell death. Two genes, glutamylcysteine synthetase (GSH1) and glutathione synthetase (GSH2), are involved in GSH synthesis, and genetic manipulation of these enzymes interferes with cellular levels of GSH. Any fluctuations, an increase or decrease, in cellular GSH and oxidized GSH levels has profound effects on plant growth and development, as GSH is associated with the regulation of the cell cycle, redox signaling, enzymatic activities, defense gene expression, systemic acquired resistance and xenobiotic detoxification. Being a major component of ascorbate-glutathione (AsA-GSH) and glyoxalase (Gly) pathways, GSH helps to govern the level of plant oxidative stress by modulating ROS and methylglyoxal (MG) detoxification in plants. Although there has been significant progress made investigating the multiple roles of GSH in abiotic stress tolerance, many aspects of GSH-mediated abiotic stress responses and stress tolerance require additional research if GSH metabolism is to be manipulated to help develop abiotic stress-tolerant and nutritionally improved crop plants. This book will provide information the roles of GSH in plants that are directly or indirectly involved in many important metabolic processes and physiological functions, including GSH synthesis, compartmentation and transport, GSH-mediated ROS and MG detoxification, as well as GSH signaling functions in modulating plant growth, development and responses to abiotic stresses. The main objective of this volume is to promote the important role of GSH in plant biology by supplying basic, comprehensive and up to date information for advanced students, scholars and scientists interested in or already engaged in research that involves GSH. Finally, this book will be a valuable resource for future GSH-related research, and can be considered as a textbook for graduate students and as a reference book for front-line researchers working on the relationships between GSH and abiotic stress responses and tolerance.