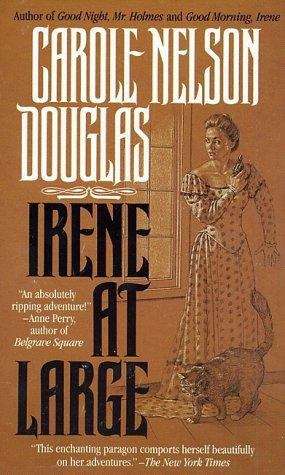 In Irene at Large, the American opera singer MS. Irene Adler Norton engages in a battle of wits with Sherlock Holmes and a vicious killer seeking to hide a traitorous

past...Irene lures Holmes, just concluding the "Naval Treaty" case, into the hunt. Douglas has penned a delightfull romp in this Victorian adventure novel about the only

woman Sherlock Holmes ever admired, and indeed she

lives up to the honor.

Irene Adler, the dashing heroine of IRENE AT LARGE, is

the flamboyant creature who will always be "the woman"

mains fresh and amusing in this third book of the Irene Adler series.

In Irene Adler's third adventure she is embroiled with international espionage, a plot against the life of Sherlock Holme's friend Dr. Watson, and the hidden history of Sebastian Moran...the villanous henchman of Holmes's greatest enemy Professor Moriarty.

From Afghanistan to Paris, Russia to London the mystery unravels and the unstoppable Irene Adler is there!