History Of The Indian Mutiny Of 1857-8 – Vol. VI [Illustrated Edition] 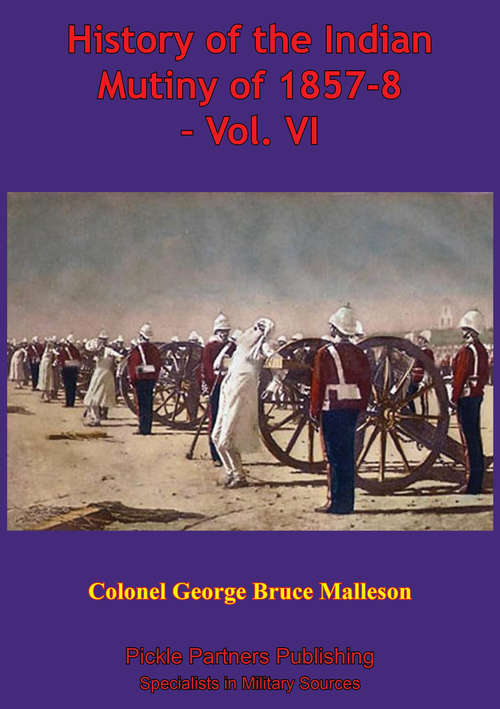 By 1857, British power in India had been largely undisputed for almost fifty years, however, the armies of the East India Company were largely recruited from the native people of India. This inherent weakness would be exposed during the events of the Indian Mutiny of 1857-1858, as the Sepoy soldiers turned against their erstwhile British employers.

The events that led up to the Revolt were many and varied, including British highhandedness, ignorance of local customs and religious values, and incendiary propaganda. It is generally argued that the spark that lit the flame was the rumour that the newly issued rifle cartridges would be greased either with tallow, derived from beef and thereby offensive to Hindus, or lard, derived from pork and thereby offensive to Muslims. The enraged soldiers mutinied across a number of Indian States, taking Delhi, besieging Lucknow, and revolting in Oudh.

The rebellion was eventually quelled in 1858 however, the effects of the Mutiny were far ranging and important. The East Indian Company was dissolved and the British government set about reorganising all facets of its power in India from the political to the administration and, most pointedly, the military. Although India would not gain its Independence until 150 years later, the events of the Indian Mutiny stayed in the folk consciousness of the country, a number of the leaders were lionized in certain circles, and a measure of nascent nationhood was born.

Of the many books written on the event, few are as well respected, accurate, frequently read or cited as the six volume history produced by two ex-British Army officers, Sir John Kaye and Colonel George Malleson, who had both erved extensively in India.

This sixth volume deals with the effects of the revolt in the districts/areas not previously covered – Sindh, Agra and Rohilkhand, the civil districts, and the Navy.