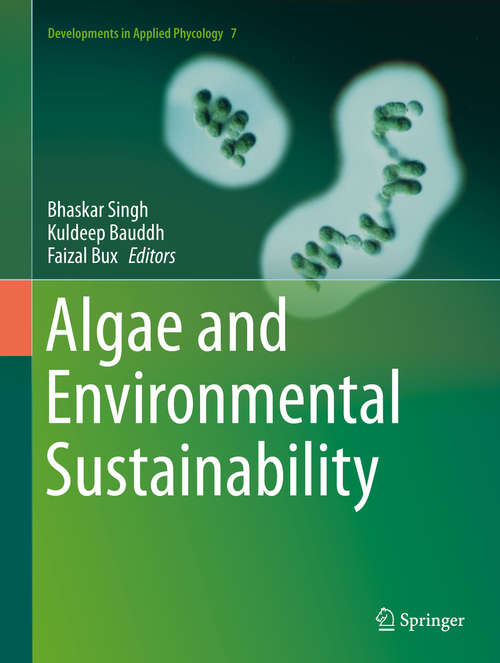 This book presents the dynamic role of algae in a sustainable environment. Two major aspects, namely bioenergy and bioremediation, have been elaborated in various chapter contributed by scientists and teachers from different geographical areas throughout the world. Algal biofuels is an emerging area of equal interest to researchers, industries, and policy makers working or focusing on alternative (i. e. renewable) fuels. Algae have been an area of interest due to their wide range of applications. Over the last 5 decades, eukaryotic algae have been used in the aquaculture industry as feed for invertebrates, providing a rich source of antioxidants, dietary fiber, minerals and protein. More recently, there has been a focus on the use of algal biomass in the development of alternative fuels. The extraction of oil from algae has been widely explored as a much more viable feedstock than plant-based oils in large-scale fuel production. using algae as feedstock has the advantages that it doesn't require arable land and that wastewater can be used as a source of nutrients in their culture. The multifunctional approach of algae includes pollution remediation, carbon sequestration, biofuels production, and delivery of value-added products. However, there are still some obstacles that need to be overcome to make their use as potential feedstock for biofuels techno-economically feasible. In order to maintain the sustainability aspect of  algal biofuels, various aspects have to be studied and critically analyzed to assess the long-term sustainability of algal derived biofuels. This book discusses the role of algae as a promising future feedstock for biofuels. They are known to sequester carbon in much larger amounts than plants and as such the book also describes their phycoremediation potential for conventional as well as emerging contaminants. It describes the role of anaerobic digestion in algal biorefineries; bioreactions and process parameters; biogas recovery and reuse. The role of algal biofilm based technology in wastewater treatment and transforming waste into bio-products is discussed, and remediation of sewage water through algae is assessed.  The book also describes the production of biohydrogen, bio-oil, biodiesel; and the major bottlenecks in their usage. The emerging characterization techniques of these biofuels (bio-oil and biodiesel) are described, as are the decolorizing potential of algae and the genetic engineering techniques that could enhance the production of lipids in algae. Other aspects of the book include the role of remote sensing technology in the monitoring of algae and a life cycle assessment of algal biofuels.