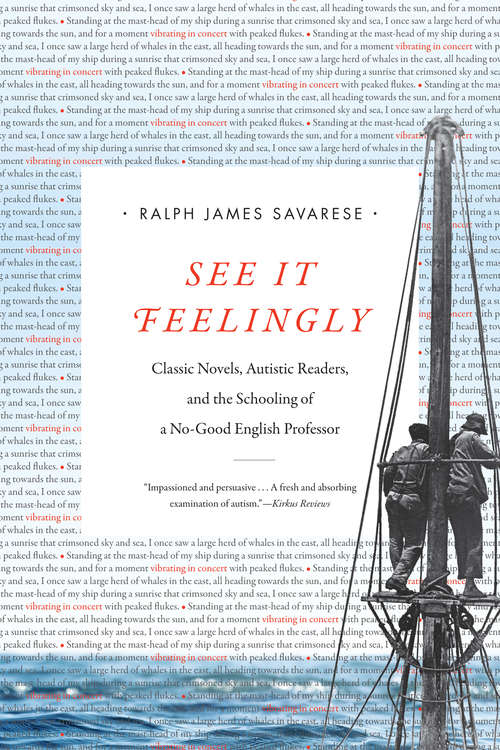 “We each have Skype accounts and use them to discuss [Moby-Dick] face to face. Once a week, we spread the worded whale out in front of us; we dissect its head, eyes, and bones, careful not to hurt or kill it. The Professor and I are not whale hunters. We are not letting the whale die. We are shaping it, letting it swim through the Web with a new and polished look.”—Tito Mukhopadhyay Since the 1940s researchers have been repeating claims about autistic people's limited ability to understand language, to partake in imaginative play, and to generate the complex theory of mind necessary to appreciate literature. In See It Feelingly Ralph James Savarese, an English professor whose son is one of the first nonspeaking autistics to graduate from college, challenges this view. Discussing fictional works over a period of years with readers from across the autism spectrum, Savarese was stunned by the readers' ability to expand his understanding of texts he knew intimately. Their startling insights emerged not only from the way their different bodies and brains lined up with a story but also from their experiences of stigma and exclusion. For Mukhopadhyay Moby-Dick is an allegory of revenge against autism, the frantic quest for a cure. The white whale represents the autist's baffling, because wordless, immersion in the sensory. Computer programmer and cyberpunk author Dora Raymaker skewers the empathetic failings of the bounty hunters in Philip K. Dick's Do Androids Dream of Electric Sheep? Autistics, some studies suggest, offer instruction in embracing the nonhuman. Encountering a short story about a lonely marine biologist in Antarctica, Temple Grandin remembers her past with an uncharacteristic emotional intensity, and she reminds the reader of the myriad ways in which people can relate to fiction. Why must there be a norm? Mixing memoir with current research in autism and cognitive literary studies, Savarese celebrates how literature springs to life through the contrasting responses of unique individuals, while helping people both on and off the spectrum to engage more richly with the world.