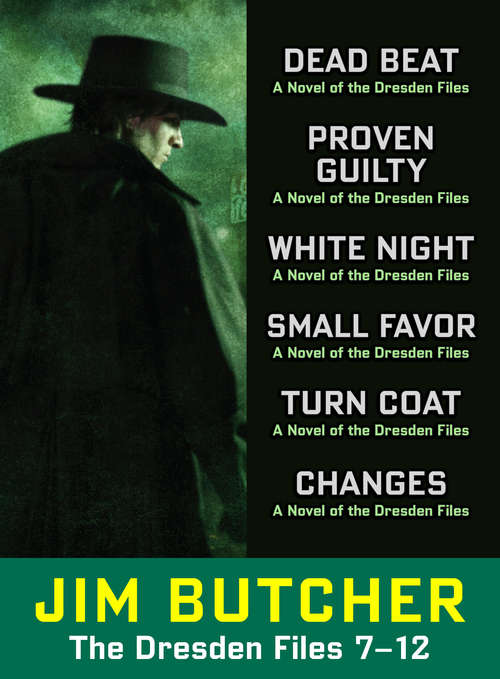 Dead Beat: When a killer vampire threatens to destroy head of Special Investigations Karrin Murphy's reputation unless Harry delivers the powerful Word of Kemmler to her, he has no choice. Now Harry is in a race against time to find the Word before Chicago experiences a Halloween night to wake the dead.

Proven Guilty: The White Council of Wizards has drafted Harry Dresden as a Warden and assigned him to look into rumors of black magic in Chicago. Malevolent entities that feed on fear are loose in the Windy City, but it's all in a day's work for a wizard, his faithful dog, and a talking skull named Bob.

White Night: In Chicago, someone has been killing practitioners of magic, those incapable of becoming full-fledged wizards. Shockingly, all the evidence points to Harry Dresden's half-brother, Thomas, as the murderer. Determined to clear his sibling's name, Harry uncovers a conspiracy within the White Council of Wizards that threatens not only him, but his nearest and dearest, too...

Small Favor: Harry Dresden?s life finally seems to be calming down?until a shadow from the past returns. Mab, monarch of the Sidhe Winter Court, calls in an old favor from Harry, one small favor that will trap him between a nightmarish foe and an equally deadly ally, and that will strain his skills, and loyalties, to their very limits.

Turn Coat: The Warden Morgan has been accused of treason against the Wizards of the White Council-and there's only one final punishment for that crime. He's on the run, he wants his name cleared, and he needs someone with a knack for backing the underdog. Like Harry Dresden. Now, Harry must uncover a traitor within the Council, keep a less-than-agreeable Morgan under wraps, and avoid coming under scrutiny himself. And a single mistake could cost Harry his head...

Changes: Long ago, Susan Rodriguez was Harry Dresden's lover-until she was attacked and left struggling with the bloodlust of the vampiric Red Court. Now, she needs Harry's help. Harry's enemies have found the secret she has hidden for so long, and he will have to unleash the full fury of his untapped power.