Adam Smith And The Character Of Virtue 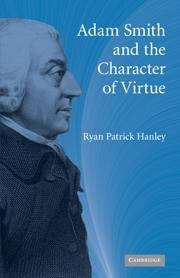 Recent years have witnessed a renewed debate over the costs at which the benefits of free markets have been bought. This book revisits the moral and political philosophy of Adam Smith, capitalism's founding father, to recover his understanding of the morals of the market age. In so doing it illuminates a crucial albeit overlooked side of Smith's project: his diagnosis of the ethical ills of commercial societies and the remedy he advanced to cure them. Focusing on Smith's analysis of the psychological and social ills endemic to commercial society - anxiety and restlessness, inauthenticity and mediocrity, alienation and individualism - it argues that Smith sought to combat corruption by cultivating the virtues of prudence, magnanimity, and beneficence. The result constitutes a new morality for modernity, at once a synthesis of commercial, classical, and Christian virtues and a normative response to one of the most pressing political problems of Smith's day and ours. Ryan Patrick Hanley is Assistant Professor of Political Science at Marquette University. His research in the history of political philosophy has appeared in the American Political Science Review, the American Journal of Political Science, the Review of Politics, History of Political Thought, the European Journal of Political Theory, and other academic journals and edited volumes. He is also the editor of the forthcoming Penguin Classics edition of Adam Smith's Theory of Moral Sentiments, featuring an introduction by Amartya Sen, and a co-editor, with Darrin McMahon, of The Enlightenment: Critical Concepts in History.