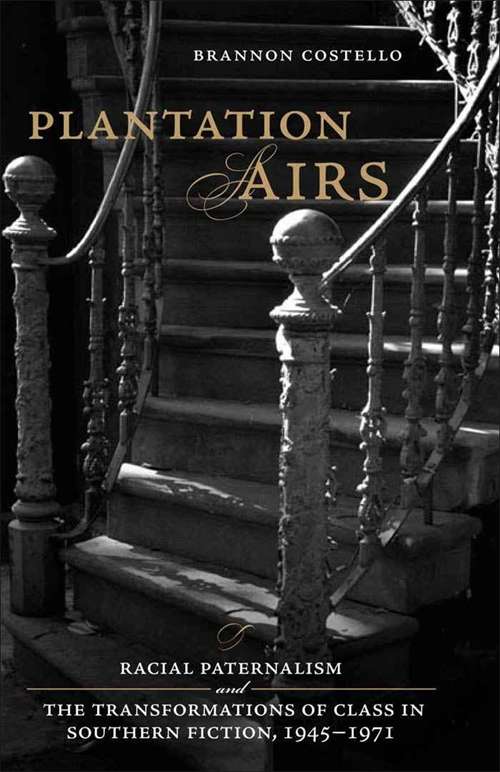 In Plantation Airs, Brannon Costello argues persuasively for new attention to the often neglected issue of class in southern literary studies. Focusing on the relationship between racial paternalism and social class in American novels written after World War II, Costello asserts that well into the twentieth century, attitudes and behaviors associated with an idealized version of agrarian antebellum aristocracy -- especially, those of racial paternalism -- were believed to be essential for white southerners. The wealthy employed them to validate their identities as "aristocrats," while less-affluent whites used them to separate themselves from "white trash" in the social hierarchy. Even those who were not legitimate heirs of plantation-owning families found that "putting on airs" associated with the legacy of the plantation could align them with the forces of power and privilege and offer them a measure of authority in the public arena that they might otherwise lack.Fiction by Zora Neale Hurston, Eudora Welty, William Faulkner, Ernest Gaines, Walker Percy, and others reveals, however, that the racial paternalism central to class formation and mobility in the South was unraveling in the years after World War II, when the civil rights movement and the South's increasing industrialization dramatically altered southern life. Costello demonstrates that these writers were keenly aware of the ways in which the changes sweeping the South complicated the deeply embedded structures that governed the relationship between race and class. He further contends that the collapse of racial paternalism as a means of organizing class lies at the heart of their most important works -- including Hurston's Seraph on the Suwanee and her essay "The 'Pet Negro' System," Welty's Delta Wedding and The Ponder Heart, Faulkner's The Mansion and The Reivers, Gaines's Of Love and Dust and his story "Bloodline," and Percy's The Last Gentleman and Love in the Ruins.By examining ways in which these works depict and critique the fall of the plantation ideal and its aftermath, Plantation Airs indicates the richness and complexity of the literary responses to this intersection of race and class. Understanding how many of the modern South's best writers imagined and engaged the various facets of racial paternalism in their fiction, Costello confirms, helps readers construct a more comprehensive picture of the complications and contradictions of class in the South.