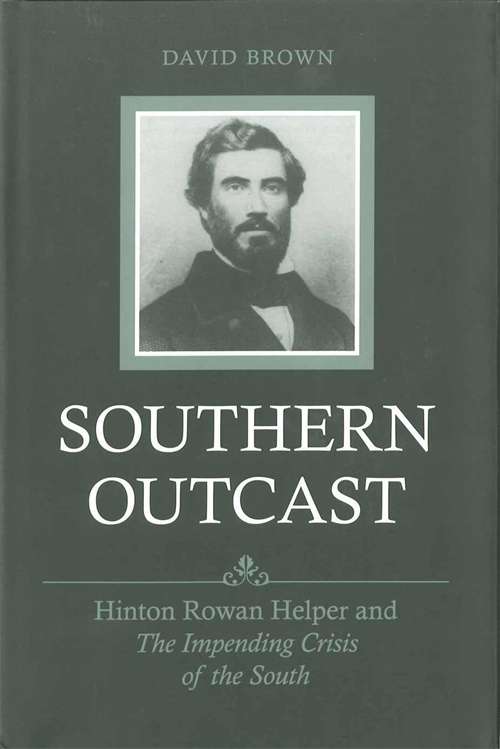 Hinton Rowan Helper (1829--1909) gained notoriety in nineteenth-century America as the author of The Impending Crisis of the South (1857), an antislavery polemic that provoked national public controversy and increased sectional tensions. In his intellectual and cultural biography of Helper -- the first to appear in more than forty years -- David Brown provides a fresh and nuanced portrait of this self-styled reformer, exploring anew Helper's motivation for writing his inflammatory book.Brown places Helper in a perspective that shows how the society in which he lived influenced his thinking, beginning with Helper's upbringing in North Carolina, his move to California at the height of the Californian gold rush, his developing hostility toward nonwhites within the United States, and his publication of The Impending Crisis of the South. Helper's book paints a picture of a region dragged down by the institution of slavery and displays surprising concern for the fate of American slaves. It sold 140,000 copies, perhaps rivaled only by Uncle Tom's Cabin in its impact. The author argues that Helper never wavered in his commitment to the South, though his book's devastating critique made him an outcast there, playing a crucial role in the election of Lincoln and influencing the outbreak of war.As his career progressed after the war, Helper's racial attitudes grew increasingly intolerant. He became involved in various grand pursuits, including a plan to link North and South America by rail, continually seeking a success that would match his earlier fame. But after a series of disappointments, he finally committed suicide.Brown reconsiders the life and career of one of the antebellum South's most controversial and misunderstood figures. Helper was also one of the rare lower-class whites who recorded in detail his economic, political, and social views, thus affording a valuable window into the world of nonslaveholding white southerners on the eve of the Civil War. His critique of slavery provides an important challenge to dominant paradigms stressing consensus among southern whites, and his development into a racist illustrates the power and destructiveness of the prejudice that took hold of the South in the late nineteenth century, as well as the wider developments in American society at the time.