The Tao of Emerson 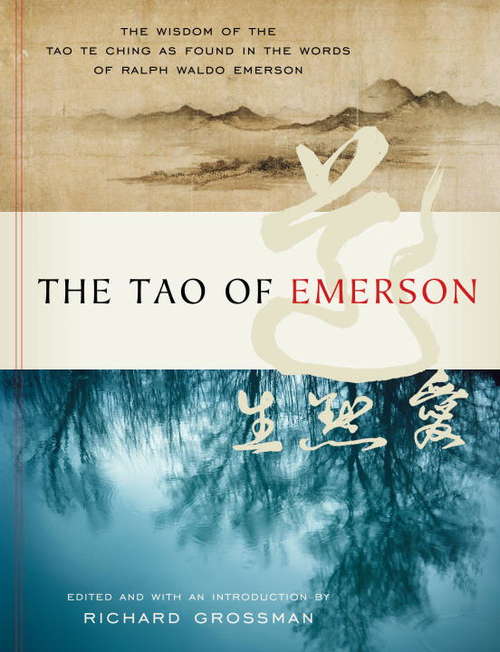 The Tao of Emerson strikingly brings together two of the most influential voices in the history of letters: Lao Tse, the sixth-century B.C. Chinese mystic, and Ralph Waldo Emerson, the American transcendentalist known to many as "the sage of Concord." By adroitly juxtaposing on facing pages the texts of Lao Tse's masterpiece, the Tao Te Ching, with Emerson's writings, Richard Grossman illuminates how these two remarkable men, from opposite sides of the world and separated by 2,500 years, are united in an inspired wisdom and common spirit: to live simply and tranquilly; trust one's own intuition; seek out and appreciate the spiritual grace in the natural world; act without self-assertion; abjure violence; harmonize with the ebb and flow of nature and circumstances; and, above all, assure that there is a place in the world for humility, yielding, gentleness, and serenity.There is no direct path linking Lao Tse to Emerson, since the Tao Te Ching was not translated into English until 1891, nine years after Emerson's death. But America's Founding Thinker was nonetheless in many ways the heir to the great Chinese mystic's insight and philosophy. As Grossman observes, "Emerson's brand of fresh home-grown English adds a radiant color to the ancient thoughts of the Chinese Master." Although Lao Tse was a citizen of the world's oldest empire and Emerson of its youngest republic, The Tao of Emerson makes the brilliantly presented case that a common literary thread binds these two men. Grossman's Introduction, in which he compares the men's lives, and the passages he has selected from their work give both writers a special resonance for today's reader and help to reveal Emerson in a while new light.This volume includes original brush calligraphy by the celebrated Taoist master Chungliang Al Huang.Praise for The Tao of Emerson"This inspired book from one of Emerson's strongest readers is a great gift. Through the reflected light of the Tao Te Ching, Richard Grossman has made the core of Emerson's wisdom transparent, allowing us to see into the heart of what makes the sage of Concord our very own Lao Tse." --Richard G. Geldard, editor of The Essential Transcendentalists"One measure of a spiritually serious book is whether it repeatedly stops us dead in our tracks as we read it and allows us to foresee the ultimate triumph of truth and principle in our lives and in the life of the world. This is such a book." --Jacob Needleman, author of Why Can't We Be Good?"Deeply immersing himself in both the wisdom of Lao Tse and the philosophy of Ralph Waldo Emerson, Richard Grossman has produced a remarkable Guide to life, a handbook filled with venerable worlds combined to yield a new poetry of the mind. Reading it, 'we stand,' with Emerson, 'before the secrets of the world.'" --Megan Marshall, author of The Peabody Sisters: Three Women Who Ignited American Romanticism"This marvelous volume will bring joy and light to those who know or even suspect that Emersonianism is not a system, a product, or a position but a way or a path. For those who haven't yet gotten it but want to try, this book is the perfect place to start." --Robert D. Richardson, Jr., author of Emerson: The Mind on FireFrom the Hardcover edition.