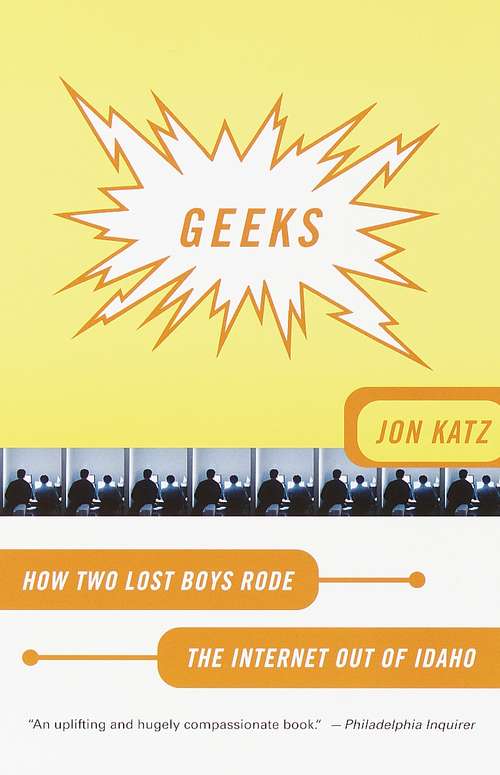 Jesse and Eric were roommates in the tiny town of Caldwell, Idaho, nineteen-year-old working class kids eking out a living with their seven-dollar-an-hour jobs selling and fixing computers. College was never in the cards. Their families had been torn apart by divorce and hard times, separation and illness. They had almost no social lives, and little to look forward to. They spent every spare cent on their computers, and every spare moment on-line.

Jesse and Eric were proud geeks-- suspicious or disdainful of authority figures, proud of their status as outsiders, fervent in their belief in the positive power of technology. They'd been outsiders as long as they could remember, living far from the mainstream of school or town life. Nobody spoke for them, they were on nobody's social or political agenda.

Geeks is the story of how Jesse and Eric--and others like them--used technology to try and change their lives and alter their destiny. They rode the Internet out of Idaho to Chicago, a city they had ever set foot in, seeking the American Dream, a better life. Geeks describes this brave and difficult journey, as two self-described social misfits use the resources of the Internet to try to construct a new future for themselves, escape the boundaries of their dead-end lives, and find a community they could belong to.

Geeks explores a growing subculture about which many of us know little, a world with its own language, traditions, and taboos. In telling the stories of Jesse, Eric, and others like them, Geeks is a story about the very human face of technology.

[This text is listed as an example that meets Common Core Standards in English language arts in grades 6-8 at http://www.corestandards.org.]