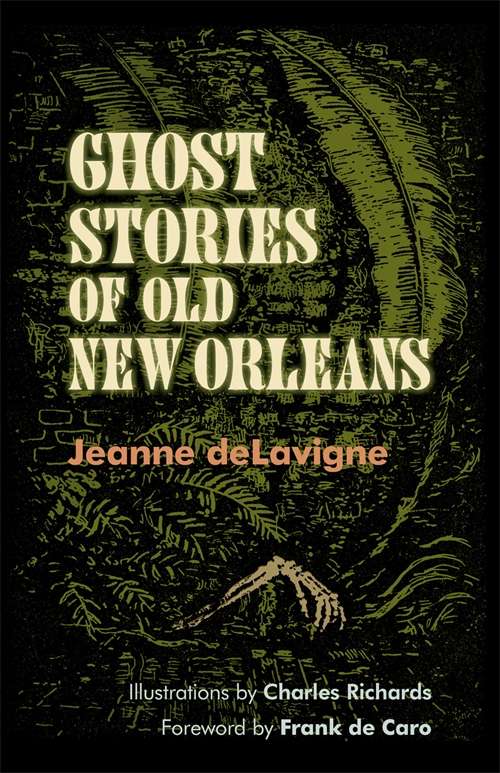 "He struck a match to look at his watch. In the flare of the light they saw a young woman just at Pitot's elbow -- a young woman dressed all in black, with pale gold hair, and a baby sleeping on her shoulder. She glided to the edge of the bridge and stepped noiselessly off into the black waters." -- from Ghost Stories of Old New OrleansGhosts are said to wander along the rooftops above New Orleans' Royal Street, the dead allegedly sing sacred songs in St. Louis Cathedral, and the graveyard tomb of a wealthy madam reportedly glows bright red at night. Local lore about such supernatural sightings, as curated by Jeanne deLavigne in her classic Ghost Stories of Old New Orleans, finds the phantoms of bitter lovers, vengeful slaves, and menacing gypsies haunting nearly every corner of the city, from the streets of the French Quarter to Garden District mansions. Originally printed in 1944, all forty ghost stories and the macabre etchings of New Orleans artist Charles Richards appear in this new edition.Drawing largely on popular legend dating back to the 1800s, deLavigne provides vivid details of old New Orleans with a cast of spirits that represent the ethnic mélange of the city set amid period homes, historic neighborhoods, and forgotten taverns. Combining folklore, newspaper accounts, and deLavigne's own voice, these phantasmal tales range from the tragic -- brothers, lost at sea as children, haunt a chapel on Thomas Street in search of their mother -- to graphic depictions of torture, mutilation, and death. Folklorist and foreword contributor Frank de Caro places the writer and her work in context for modern readers. He uncovers new information about deLavigne's life and describes her book's pervasive lingering influence on the Crescent City's culture today.