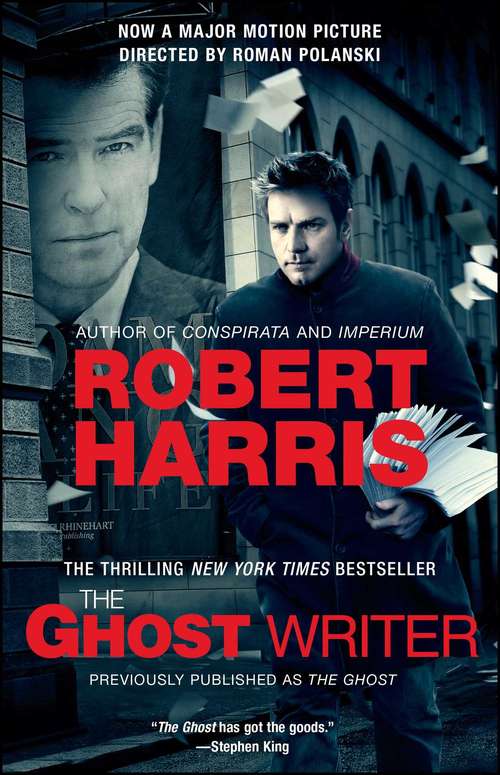 From the bestselling author of Fatherland and Imperium comes The Ghost, an extraordinarily auspicious thriller of power, politics, corruption, and murder. Dashing, captivating Adam Lang was Britain's longest serving -- and most controversial -- prime minister of the last half century, whose career ended in tatters after he sided with America in an unpopular war on terror. Now, after stepping down in disgrace, Lang is hiding out in wintry Martha's Vineyard to finish his much sought-after, potentially explosive memoir, for which he accepted one of history's largest cash advances. But the project runs aground when his ghostwriter suddenly and mysteriously disappears and later washes up, dead, on the island's deserted shore. Enter our hero -- Lang's new ghostwriter -- cynical, mercenary, and quick with a line of deadpan humor. Accustomed to working with fading rock stars and minor celebrities, he jumps at the chance to be the new ghost of Adam Lang's memoirs, especially as it means a big payday. At once he flies to Lang's remote location in America to finish the book in the seclusion of a luxurious estate, but it doesn't take him long to realize he has made a fatal error in judgment. The state of affairs is grim enough when the ghost begins to unearth the bone-chilling circumstances of his predecessor's death. And before long, he discovers that the ex-prime minister is not just a charismatic politician who made a few mistakes. He's a dark, tortured man with haunting secrets in his past -- secrets with the power to alter world politics. Secrets with the power to kill. Robert Harris is known the world over as a master of his trade. The Ghost is yet another signature, brilliant tour de force that will compel, captivate, and excite readers to the very last shocking page.