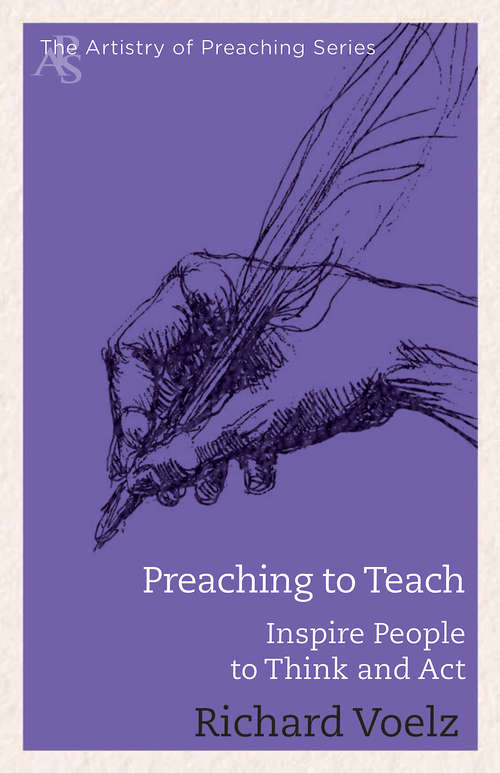 Preaching to Teach merges the related functions of preaching and teaching, and equips the reader to accomplish both.

Preachers stand up to speak each week in challenging times to unsettled congregations. Each week seems to bring a new difficult subject: mass shootings and other forms of violence; hard conversations around race, ethnicity, and multi-religious contexts; immigration; poverty; climate change; foreign and domestic terrorism; and bickering about it all on social media. Preachers are hungry for ways to envision the work of preaching in these times, as well as for tools that will help them speak to difficult and contentious topics.

In a divided and weary world, preachers struggle with the choice of any number of “images” to describe their preaching identity. Responding to social crisis after social crisis, preachers most often lean toward the roles of pastor, prophet, or somewhere on the spectrum in between the two. Juggling between these images and their associated roles on a week-to-week basis can be exhausting. But there is an ancient image of the preacher that may help: the preacher as teacher.

The image of teacher has traditionally focused on content and rhetorical aspects of preaching: the preacher is conveying information, modeling theological reasoning, or effecting a certain pulpit style. But rather than focusing on traditional concepts of teaching to determine the content, form, style, or delivery of sermons, the field of critical pedagogy (represented by notable figures such as Paulo Freire, Henry Giroux, Peter McLaren, and bell hooks) offers a way of re-envisioning the preacher-as-teacher. Recasting the preacher-as-teacher through the lens of critical pedagogy grounds the image of teacher in an ethical framework, inviting preachers to redefine their public roles, stand in relationships of solidarity with communities of faith, break the silences of taboos, tackle tough issues, and re-imagine the world in the shape of the kingdom of God.