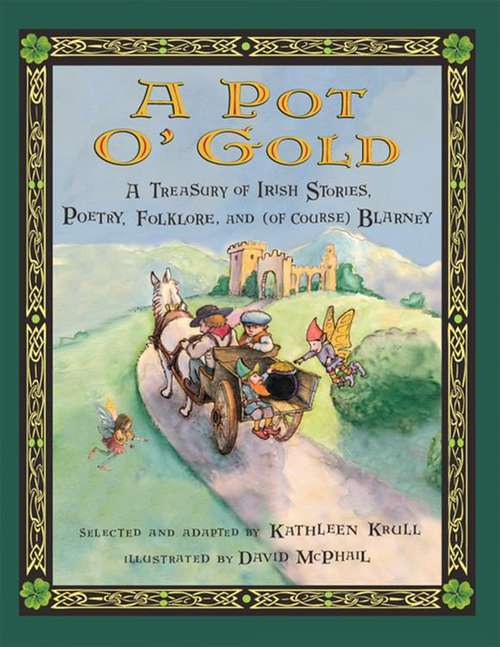 "Though it may only be a small emerald isle in the middle of the sea, Ireland's heritage is very large indeed. Its rich history of literature and lore has inspired imaginations for hundreds of years. In A Pot O' Gold, noted writer Kathleen Krull and beloved illustrator David McPhail bring this legacy to life. Created for families, this anthology compiles classic and rare examples of Irish culture, including stories, poems, songs, recipes, and even a little blarney.

From legends of leprechauns and fairies to the classic poetry of Yeats and Joyce, the treasures herein invite children and parents, brothers and sisters--even grandparents and grandchildren--to share the wonders of Ireland."

This is a wide ranging collection of many aspects of Irish literature and its proud, long standing, love of words and lore for the whole family. Read stories of an Irish Cinderella, a spoiled boy who reforms, a woman caught stealing milk from a farmer's cows, and Saint Patrick and the salmon. Enjoy poems about the ocean, onions, a monk's cat, Irish pride, leprechauns and children stolen by fairies. Savor recipes for Irish soda bread, marshmallow crackers, and Irish stew. Be entertained by Irish songs, battle cries, limericks, cures and curses. Background is given about many authors, and comments putting the selections in context are made. The pages are rich with lovely illustrations highlighting the ocean coasts and green countryside of Ireland which are lavishly described. A map of Ireland is also described. A list of sources is given at the end of the book.