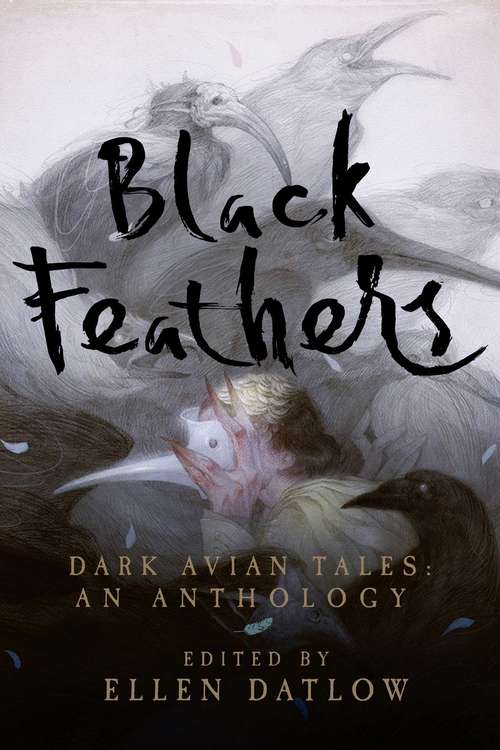 A dazzling anthology of avian-themed fiction guaranteed to frighten and delight, edited by one of the most acclaimed horror anthologists in the genre.

Birds are usually loved for their beauty and their song. They symbolize freedom, eternal life, the soul.

There’s definitely a dark side to the avian. Birds of prey sometimes kill other birds (the shrike), destroy other birds’ eggs (blue jays), and even have been known to kill small animals (the kea sometimes eats live lambs). And who isn’t disgusted by birds that eat the dead—vultures awaiting their next meal as the life blood flows from the dying. One of our greatest fears is of being eaten by vultures before we’re quite dead.

Is it any wonder that with so many interpretations of the avian, that the contributors herein are eager to be transformed or influenced by them? Included in Black Feathers are those obsessed by birds of one type or another. Do they want to become birds or just take on some of the “power” of birds? The presence or absence of birds portends the future. A grieving widow takes comfort in her majestic winged neighbors, who enable her to cope with a predatory relative. An isolated society of women relies on a bird to tell their fortunes. A silent young girl and her pet bird might be the only hope a detective has of tracking down a serial killer in a tourist town. A chatty parrot makes illegal deals with the dying. A troubled man lives in isolation with only one friend for company—a jackdaw.

In each of these fictions, you will encounter the dark resonance between the human and avian. You see in yourself the savagery of a predator, the shrewd stalking of a hunter, and you are lured by birds that speak human language, that make beautiful music, that cypher numbers, and seem to have a moral center. You wade into this feathered nightmare, and brave the horror of death, trading your safety and sanity for that which we all seek—the promise of flight.