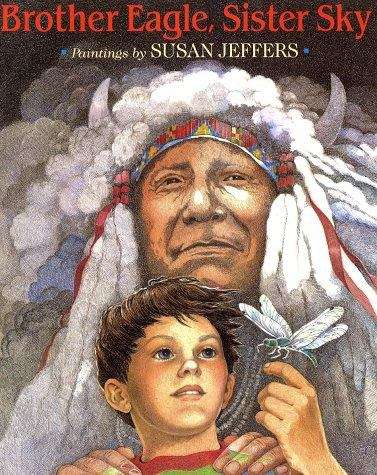 From the Book jacket:

How can you buy the sky?

How can you own the rain

So began the moving words attributed to a great American Indian chief over one hundred years ago. They are words that eloquently and poetically captured the central belief of Native Americans: that this earth and every creature on it is sacred. It is these words and this belief that have inspired what has been truly a labor of love for Susan Jeffers; her most extraordinary paintings illuminate the words and world vision possessed by Native Americans.

Brother Eagle, Sister Sky will haunt all who see it with its portrayal of what has been lost in our world, and is an important message to people young and old to care for and preserve the environment.

CHIEF SEATTLE lived from approximately 1790 to 1866, in the Pacific Northwest region of what is now the United States. He was a chief of the Suquamish and the Duwamish Indians and was present at treaty negotiations that took place with the dominant white settlers in the 1850s. It is at one of these negotiations that Chief Seattle delivered a speech in his native tongue, a speech which has since in a variety of formsserved as the basis of ecological movements around the world and from which Brother Eagle, Sister Sky is drawn.

Susan Jeffers is internationally acclaimed for her exquisite paintings, and the illustrator of numerous picture books for Dialall of which brilliantly portray nature.