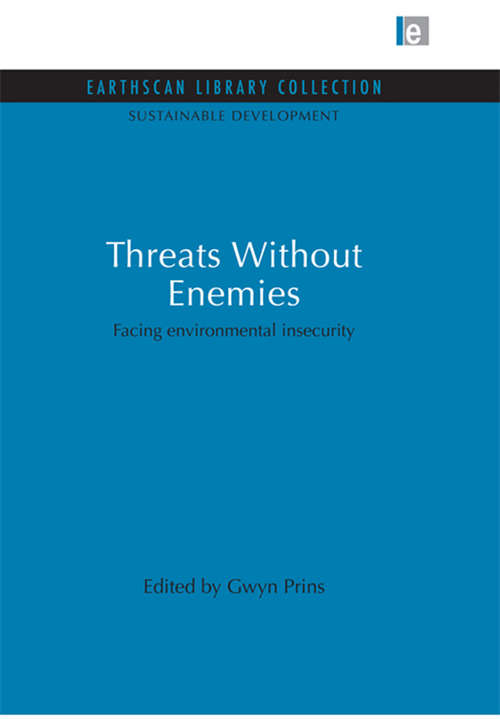 The world is moving into a new era which will be dominated by a new range of threats and a new range of priorities. Already headlines tell of storms and droughts, mass emigrations, the danger of old Soviet nuclear reactors and the thinning ozone layer, and with the menaces of global warming, deforestation, pollution and loss of biodiversity, the picture is likely to get bleaker. Unlike traditional threats, these are not made deliberately and standard military responses are usually inappropriate They are threats without enemies and they present quite new and fundamental challenges to the international community which has to find new methods and institutions, as well as the resolve, to tackle them.

In this book, eminent experts describe the new threats and the scale of the dangers which they present and set out the political, military and institutional changes needed. Gwyn Prins is Director of the Global Security Programme at the University of Cambridge. He is author of Top guns and Toxic Whales, also published by Earthscan. Progress For A Small Planet Three topics dominate discussions of the global environment: pollution; the consequences of the affluent running ever faster through finite resources; and the growing tensions between rich and poor as a third of humanity continues to live and die in desperate poverty. In this exceptional book Barbara Ward (co-author with Rene Dubos of the bestselling Only One Earth) refused to see these processes as inevitable. It describes new technologies for recycling waste, for energy, for 'getting more for less' ,linking them to ordinary people's working lives. It also suggests a strategy for meeting the basic needs of the disadvantaged, and shows how the vast inequalities between countries can be reduced. This perceptive survey of policies outlines a planetary bargain between the world's nations that would guarantee individual freedom from poverty and keep our shared biosphere in good working order. Originally published in 1993