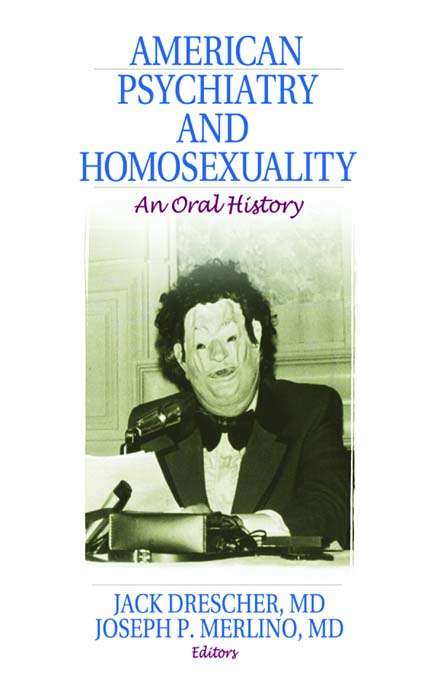 Dr. John Fryer, who disguised his identity to speak before the APA’s annual meeting in 1972 on the discrimination gay psychiatrists faced in their own profession

Dr. Charles Silverstein, who saw the diagnosis of homosexuality as a means of social control

Dr. Lawrence Hartmann, who helped reform the APA and later served as its President in 1991-92

Dr. Frank Rundle, who helped organize the first meeting of what would become the APA Caucus of Gay, Lesbian and Bisexual Psychiatrists

Dr. Nanette Gartrell, a pioneer of feminist issues within the APA

Dr. Stuart Nichols, President of the AGLP in 1983-84 and a founding member of the Gay and Lesbian Psychiatrists of New York (GLPNY)

Dr. Emery Hetrick, a founding member of both AGLP and GLPNY

Dr. Bertram Schaffner, who was instrumental in providing group psychotherapy for physicians with AIDS

Dr. Martha Kirkpatrick, a long-time leader in psychiatry and psychoanalysis, both as a woman and an “out” lesbian

Dr. Richard Pillard, best known for studying the incidence of homosexuality in families of twins

Dr. Ralph Roughton, the first openly gay Training and Supervising Psychoanalyst to be recognized within the American and International Psychoanalytic AssociationsAmerican Psychiatry and Homosexuality presents the personal, behind-the-scenes accounts of a major historical event in psychiatry and medicine and of a decision that has affected society and culture ever since. This is an essential resource for mental health educators, supervisors, and professionals; historians; and LGBT readers in general.