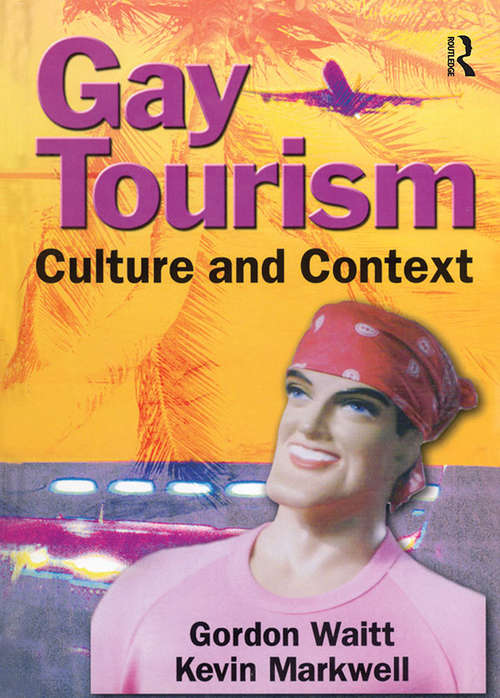 The gay tourism industrya progressive social force or a pull towards an oppressive status quo?The pink tourism dollar is now recognized as a highly profitable niche of the tourism market. Gay Tourism: Culture and Context critically investigates the emergence of a commercial gay tourism industry for male clients, the way it is organized, and how the tourism industry promotes cities, resorts, and nations as &’gay&’ destinations. This careful examination critically questions the social, political, and cultural implications regarding relationships between gay tourism, Western gay male culture, the erotic, sexual politics, and sexual diversity.Gay Tourism: Culture and Context begins by detailing how travel often enabled the expression of Western same-sex male desire in the nineteenth century and then charts the emergence of a Western gay tourism industry in the late twentieth century. A critical analysis is given of gay guidebooks and erotic videos that help to establish and maintain destinations as seemingly gay utopias, including Hawaii and the Greek island Mykonos. Carefull consideration as to debates about how the gay tourism industry operates in the context of questions regarding the globalization of sexuality, sexual citizenship and place-marketing of (homo)sexualised cities. The text includes an extensive bibliography plus several photographs, charts, and figures to clearly present concepts and ideas.Topics in Gay Tourism: Culture and Context include: the history of gay travel and tourism the effect of HIV/AIDS on gay tourist destinations gay travel writing sustaining same-sex fantasies about popular gay tourist destinations analysis of the socio-political ramifications of gay tourism the sexual politics of a heterosexual nation gay tourists as an invading force of corruption the economic rationale for the (homo)sexualized city the concept of gay villages the role of special events and festivals in gay tourism and many more!Gay Tourism: Culture and Context is enlightening reading for tourism policymakers, tourism planners, tourism managers, and teachers and students in the fields of tourism studies, gay studies, social and cultural geography, and sociology.