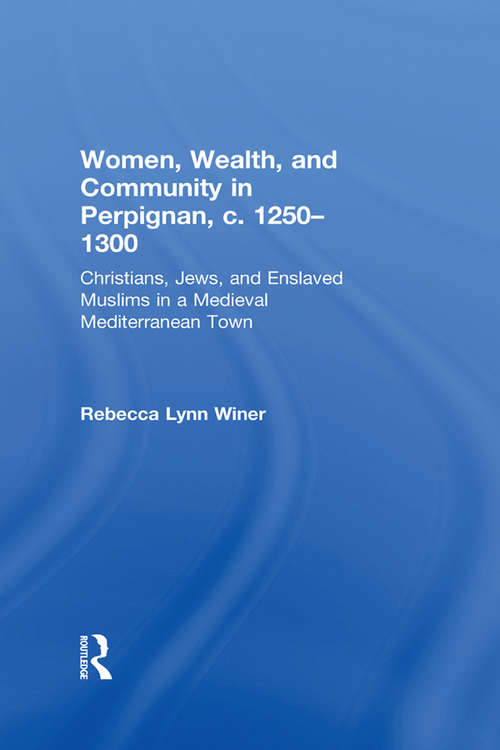 Women, Wealth, and Community in Perpignan, c. 1250-1300 investigates the gender system at work in medieval Perpignan. Using a series of notarial registers - unique as surviving records for the social history of the thirteenth-century realms of Aragon and Majorca, the political confederations to which this town belonged - Rebecca L. Winer opens a window onto the experiences of women and their families. Her interpretive framework reveals medieval assumptions about the distinct natures of Christian, Jewish, and enslaved Muslim women by analyzing which actions were curbed, controlled, or fostered in these different groups. Sensitive to questions of social rank and marital status, the book departs from traditional women's history by asking how a woman's religious identity factored in determining her economic and legal options in this society. As a frontier town, Perpignan lends itself well to an analysis of relations among Christians, Jews and Muslim slaves. The later thirteenth century also provides an ideal focus for this inquiry since the politics of Christian expansion and the economics of the western Mediterranean meant that Jewish communities flourished. In contrast, Christian/Muslim relations unfolded particularly tensely due to intermittent conflict and both groups' slave trade almost exclusively in each other's people. Winer reconstructs how the members of these three communities negotiated shared space, conducting all manner of exchanges, making (endogamous) marriages, wills, commercial contracts, and arranging for the care of children whose fathers were lost to war or disease. The first section of the book focuses on women's legal status, work and control of financial resources in the two dominant communities, Christian and Jewish, across the social spectrum. It goes on to compare the ways in which mothers' relationships to their children were understood in the Christian and Jewish communities. The book concludes by entering the homes of Christian