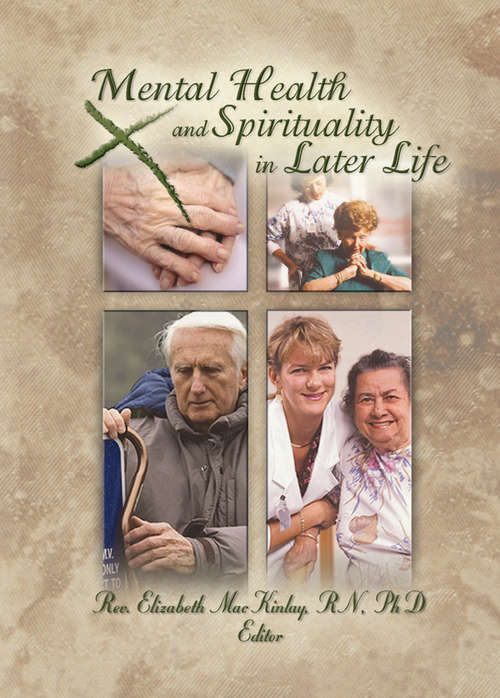 Explore pastoral strategies for dealing with mental health problems! Mental health is increasingly being recognized as an important issue in later life. This valuable book will help you examine this dimension of aging in the context of pastoral, spiritual, and cultural issues. It explores the relationship between mental health, spirituality, and religion in later life, including the search for meaning, cultural issues, spiritual issues, depression, dementia, and issues of suicide in older people. The first part of Mental Health and Spirituality in Later Life focuses on theology, ethics, and cultural issues in mental health and aging. The second part addresses issues of multidisciplinary practice, including a challenging chapter written by a woman with early onset dementia (Alzheimer's) and other chapters that present perspectives on the uses and meanings of ritual and symbolism in mental health and pastoral approaches to care. Part one of Mental Health and Spirituality in Later Life deals with issues of theology, culture, and mental health in later life, focusing on: the importance of a richly textured understanding of personhood as a prerequisite for constructing a picture of late-life mental health in the context of theology the relationship between culture, spirituality, and meaning for older immigrantsand their effects on mental health the adverse effects of a mental health system that reflects only the dominant culture of a society, leaving minority cultures vulnerable to misdiagnosis and inappropriate treatments that can do more harm than good a wholistic picture of aging that moves beyond the biomedical paradigm and demonstrates the power and potential of the human spirit in adjusting to and moving beyond suffering Part two of this valuable book addresses issues of concern to practitioners in mental health and spirituality for the aging, including: disruptive behavior among nursing home residents and common practices that fail to identify its causes or address the problem how some staff/resident interactions can produce suffering for all concernedwith case study outlines that illustrate the point memory loss and its effect on spirituality, self-worth, and the faith community pastoral care for people suffering with dementiawith practical information on helping them to make use of the power of prayer and to deal with loneliness, fear, and disempowerment an insightful look at a recent major study of residents in aged care facilities in Australia that explores the link between depression and spirituality risk and protective factors associated with suicide in later life and the treatment of depression pastoral interventions for depression and dementia