In the Words of Frederick Douglass 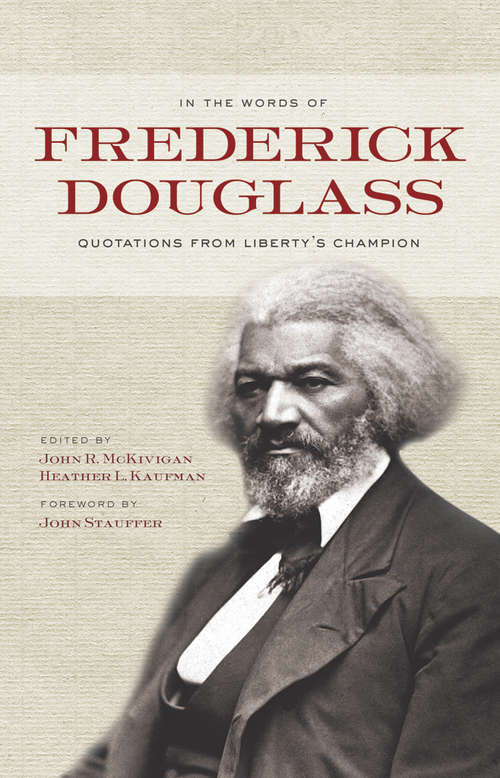 "No people are more talked about and no people seem more imperfectly understood. Those who see us every day seem not to know us."—Frederick Douglass on African Americans"There is no negro problem. The problem is whether the American people have loyalty enough, honor enough, patriotism enough, to live up to their own constitution."—on civil rights"Woman should have justice as well as praise, and if she is to dispense with either, she can better afford to part with the latter than the former."—on women"The thing worse than rebellion is the thing that causes rebellion."—on rebellion"A man is never lost while he still earnestly thinks himself worth saving; and as with a man, so with a nation."—on perseverance"I am ever pleased to see a man rise from among the people. Every such man is prophetic of the good time coming."—on Lincoln Frederick Douglass, a runaway Maryland slave, was witness to and participant in some of the most important events in the history of the American Republic between the years of 1818 and 1895. Beginning his long public career in 1841 as an agent of the Massachusetts Anti-Slavery Society, Douglass subsequently edited four newspapers and championed many reform movements. An advocate of morality, economic accumulation, self-help, and equality, Douglass supported racial pride, constant agitation against racial discrimination, vocational education for blacks, and nonviolent passive resistance. He was the only man who played a prominent role at the 1848 meeting in Seneca Falls that formally launched the women's rights movement. He was a temperance advocate and opposed capital punishment, lynching, debt peonage, and the convict lease system. A staunch defender of the Liberty and Republican parties, Douglass held several political appointments, frequently corresponded with leading politicians, and advised Presidents Lincoln, Grant, Hayes, Garfield, and Harrison. He met with John Brown before his abortive raid on Harpers Ferry, helped to recruit African American troops during the Civil War, attended most national black conventions held between 1840 and 1895, and served as U.S. ambassador to Haiti. Frederick Douglass has left one of the most extensive bodies of significant and quotable public statements of any figure in American history. In the Words of Frederick Douglass is a rich trove of quotations from Douglass. The editors have compiled nearly seven hundred quotations by Douglass that demonstrate the breadth and strength of his intellect as well as the eloquence with which he expressed his political and ethical principles.