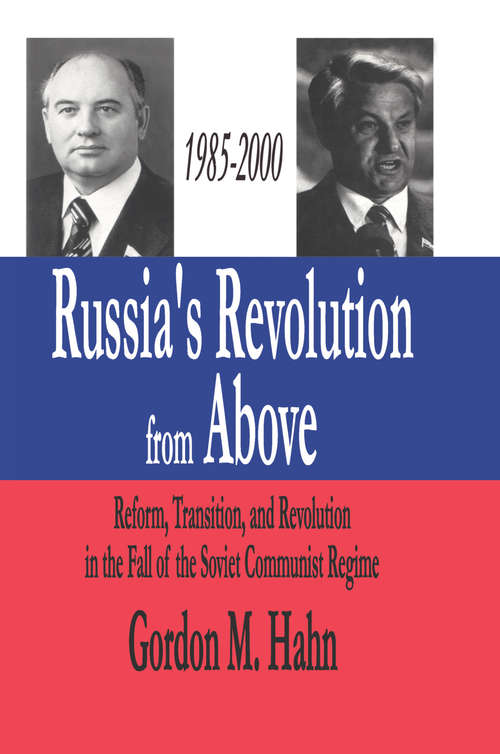 The fall of the Soviet communist regime in 1991 offers a challenging contrast to other instances of democratic transition and change in the last decades of the twentieth century. The 1991 revolution was neither a peaceful revolution from below as occurred in Czechoslovakia nor a negotiated transition to democracy like those in Poland, Hungary, or Latin America. It was not primarily the result of social modernization, the rise of a new middle class, or of national liberation movements in the non-Russian union republics. Instead, as Gordon Hahn argues, the Russian transformation was a bureaucrat-led, state-based revolution managed by a group of Communist Party functionaries who won control over the Russian Republic (RSFSR) in the mid-1990s.Hahn describes how opportunistic Party and state officials, led by Boris Yeltsin, defected from the Gorbachev camp and proceeded in 1990-91 to dismantle the institutions that bound state and party. These revolutionaries from above seized control of political, economic, natural and human resources, and then separated the party apparatus from state institutions on Russian Republic territory. With the failed August 1991 hard-line coup, Yeltsin banned the Communist Party and decreed that all Union state organs, including the KGB and military were under RSFSR control. In Hahn's account, this mode of revolutionary change from above explains the troubled development of democracy in Russia and the former Soviet republics.Hahn shows how limited mobilization of the masses stunted the development of civil societies and the formation of political parties and trade unions with real grass roots. The result is a weak society unable to nudge the state to concentrate on institutional reforms society needs for the development of a free polity and economy. Russia's Revolution from Above goes far in correcting the historical record and reconceptualizing the Soviet transformation. It should be read by historians, economists, political scientists, and Russia area scholars.